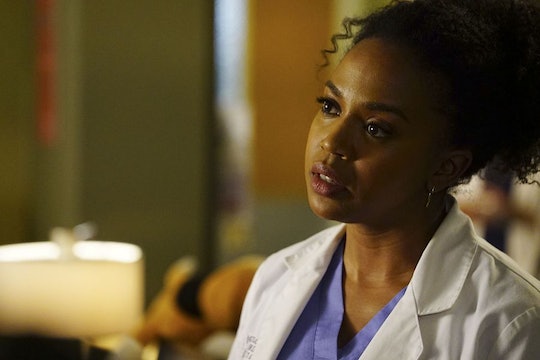 Edwards Could Be In Grave Danger On 'Grey's Anatomy'

This season of Grey’s Anatomy has been all about teetering on the edge of shocking and game-changing episodes, only to have things settle down pretty quickly. The Season 23 premiere with the pregnant prison patient was pretty epic though, as was Meredith and Riggs’ plane ride, but it’s been missing that big Grey’s tragedy. And since the promos for Episode 23 look kind of intense, does Edwards die on Grey’s Anatomy?

The show definitely isn’t afraid to kill off big characters, a la Derek, so I wouldn’t put it past them. Also, the promo for Thursday night’s episode declares that with just two episodes left of the season, “jaws will drop.” It also shows Bailey announcing a code orange, which according to one of the four possible descriptions from the medical dictionary, is "a potentially violent person with mental issues in the hospital," which makes sense, given what the clip shows.

An escaped patient is seen with Edwards in the hallway, where he becomes suddenly enraged and holds a scalpel to her throat. Then they’re in a stairway where it looks like she might fall. So does Edwards die on Grey’s Anatomy or will all of this end in someone like Jackson or Meredith saving the day? Meredith did save a patient from that bomb way back in the early seasons of Grey’s Anatomy, so we know she’s good under pressure.

Back in January, TVLine announced that Season 13 would, in fact, be the last for Jerrika Hinton (who plays Edwards on the show), so even if someone tries to intervene, Edwards might still die in the end anyway. The character was also recently put on a probation of sorts at the hospital and with what appears to be a hostage type of situation for Season 23’s penultimate episode, Edwards dying could be the way Hinton leaves the show for good. But announcing that Hinton won’t be back as a series regular could mean that she’s going to make a clean exit (being held captive by a patient will do that to you) as opposed to simply killing her off for good with no hope of a possible return.

But since the news of Hinton’s very possible departure from Grey’s Anatomy, figuring out how Edwards would be written out of the show has no doubt left fans curious and worried. But whether Edwards lives or dies on Grey’s Anatomy, "True Colors" opens up a few possibilities for how her departure will play out.