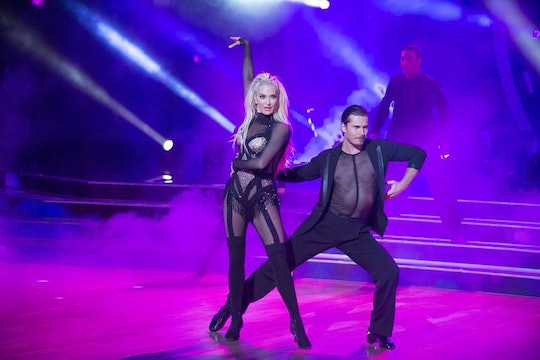 For some stars on this season of Dancing With the Stars, the dancing part might come a little easier. Experienced performers like Heather Morris and Normani Kordei have backgrounds in dancing, sure, but what about the other professional performer on the show, Erika Jayne (though others may know her as Erika Girardi from The Real Housewives of Beverly Hills)? Because of her career as a singer, does Erika Jayne have dance experience? DWTS might seem like a cakewalk for her, but it's still no doubt challenging.

Jayne has experience as a singer and dancer in both live shows and in her music videos, but dancing in the DWTS ballroom is a little different. When you have judges like Carrie Ann Inaba and Len Goodman announcing what each foxtrot or rumba dance number should have included, it brings things into perspective. Jayne has dancing experience, but the DWTS contestant isn't exactly doing the cha-cha in her music video for "XXPEN$IVE," so it's a completely different format.

But even so, Jayne told Us Weekly that despite having more experience with choreographed dancing, she knew what she was in for. "I knew it was going to be a challenge," Jayne said. "I take a couple of Aleve and I’m pretty good. So far so good." Partnered with Gleb Savchenko, Jayne made a strong first impression on the Season 24 premiere and even though it’s still been new for her, she managed to impress judge Julianne Hough.

Hough told Jayne at the end of her premiere performance, "That was, for me, the perfect balance of being your true, authentic self, and also bringing us the balance of the authentic foxtrot and the content," she said. "So for me, I absolutely loved it." In fact, even though Jayne’s first performance on DWTS only earned her a 24 out of the possible 40, for her most recent dance to Madonna’s "Express Yourself," Jayne received a score of 30.

Jayne gives off an air of confidence which is pretty infectious every time she steps into the ballroom or even talks during her rehearsals with Savchenko. But even so, Jayne told Entertainment Weekly that from the beginning, she didn’t have any unrealistic expectations of herself. "I’m just in my partner’s hands and whatever he feels we can do, that’s what we’re doing with regards to each dance," Jayne said. "I don’t know how to waltz. I do not know how to foxtrot. I don’t know how to rumba, but I’m about to learn."

Even though Jayne has dance experience, DWTS is still something new for her, just like everyone else. She also has a lot of the necessary confidence to back up some of the new moves she’s been learning.