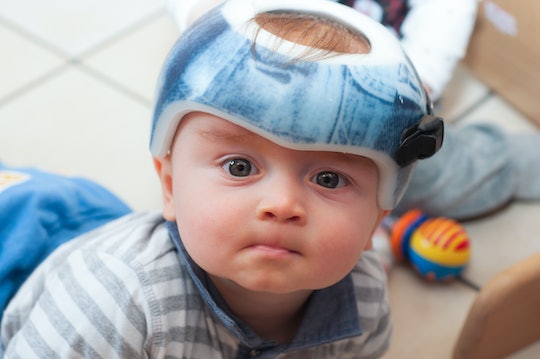 Will Insurance Cover The Cost Of A Corrective Helmet For Your Baby?

Many babies prone to snoozing on one side can end up with flat heads, a condition which can be easily treated with corrective helmets. Unfortunately, insurance doesn't always cover helmets, and the cost could take a toll on your family. But you can often *head* off the need for a helmet with early intervention, decreasing the chance you'd have to pay out of pocket.

As the American Academy of Pediatrics explained, deformational plagiocephaly, or positional skull deformities, have become more common because of doctor recommendations that infants sleep on their backs to prevent SIDS. Many babies end up favoring one side of their head when they sleep on their backs, leading to deformities since their skulls are still soft. It's not dangerous to the baby's brain, but it can lead the exterior to develop irregularly.

Typically, mild cases can be treated without corrective measures. Dr. Beth Oller, a family physician specializing in rural health, maternal health and obstetrical care, tells Romper via phone that "if you notice [your baby] has a preference of one side or the other, try to turn their head the other way" while they sleep to decrease pressure on one side, in conjunction with "alternating ways of holding them and keeping that pressure off the back of their head as much as possible" through tummy time. Those tactics should be enough to keep their head round most of the time, but in more severe cases, your baby might need to wear a corrective helmet to get their noggin back in shape.

You might be familiar with helmet therapy if you're a fan of John Legend and Chrissy Teigen, who were open about their son Miles wearing a corrective helmet over the past year. Cranial remolding helmets are specially designed to help with little one's cranial development, since they use a hard outer shell with an interior foam lining that encourages growth of the flatter areas, as John Hopkins medicine explained. They won't hurt your little one as they correct, though they may not like wearing the helmet 23 hours per day, as is required for the treatment to work. It's a simple but effective fix, and most babies will only have to wear a helmet for about three months.

But the process for getting a helmet takes a lot longer, especially if you want insurance coverage for it. Most insurance providers do not automatically cover corrective helmets, because flat heads are typically seen as a cosmetic issue that won't hurt the child's health, as Dr. Muhittin Belirgen, a Pediatric Neurosurgeon at Texas Tech Physician at Covenant Children’s, explains to Romper via phone. He says coverage won't even be an option unless you've been referred to a specialist, like a pediatric neurosurgeon, by your primary care doctor first. It's a three step process, per Belirgen.

First, you have to try at home corrective measures for two months, such as repositioning and increased tummy time. Then, your primary care provider will refer you to treatment with physical therapist for another two months, and then if that still is ineffective, helmet treatment will be considered. "By saying in our documentation, we tried tummy time, repositioning, and physical therapy," it signals to insurers that the helmet treatment is necessary, as all other options have been exhausted, according to Belirgen. Those actions will take months, and as Oller points out, your child will need "to start [treatment] between four and six months if it’s gonna make much of a difference," so it's important to go to your doctor as soon as you notice something is wrong.

But overall, it's more likely your insurer won't cover the cost of a corrective helmet. Oller has treated three children with plagiocephaly in the last year, and all three cases were denied helmet coverage. You could try to pay for one on your own, but that price adds up quickly. An individual helmet can cost between $1,300 and $3,000, per The New York Times, and the Contemporary Pediatrics journal estimated that helmet treatment costs add up to over $1 billion in the U.S. every year. Plus, Belirgen points out that it might be even harder to get coverage if you're insured via Medicaid: "If it’s Medicaid [coverage], even if it’s severe, eight out of ten [cases] are being denied," he says. That's disheartening to hear, but take comfort in the fact that if you're being denied coverage it's likely because your child doesn't need the helmet.

Basically, don't expect insurance coverage for a helmet unless a specialist doctor deems it necessary. "If you have a specialist saying it’s necessary to correct, I would fully expect insurance to cover it," Oller says. And if you think your child's head is getting a little flat, it's best to bring it up with your pediatrician as soon as possible, as early intervention will decrease the likelihood your child requires helmet treatment. Time is of the essence.

More Like This
Is It Good For Babies To Be Exposed To Germs? It’s Complicated
Can You Give A Sleeping Baby A Breathing Treatment? Experts Explain
We Have To Talk About This Fish That Will Pat Your Baby's Butt Until They Fall Asleep
Here’s What To Do If Your Baby’s Nose Bleeds After Suctioning