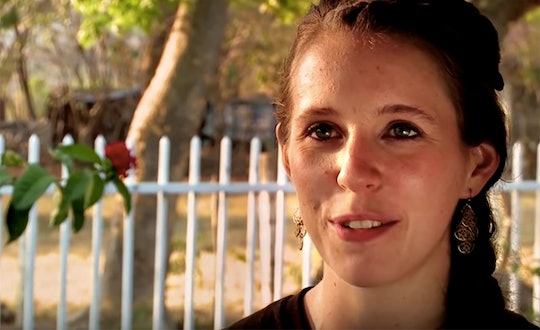 Does Jill Duggar Homeschool Her Kids? Here's What Her Family Might Do

When 19 Kids & Counting was still on the air, fans got to see firsthand how Michelle and Jim Bob homeschooled their large brood. Now that the show is no longer featured on TLC, however, viewers are learning about the family's tradition of homeschooling via Counting On. It's an interesting shift, to say the least, because it's possible that the older Duggar kids have different views on homeschooling and education techniques than Jim Bob and Michelle. As for who might deviate from tradition, some people have questions about Jill Duggar, as she leads a life that looks very different from her siblings. Adding fuel to this theory is that Jill is a bit of a rebel by Duggar standards these days (nose ring, anyone?). So, does Jill Duggar homeschool her kids? As it turns out, there's a small chance Jill might choose a different path for her kids.

In case you missed the news, Jill and her husband, Derick Dillard, left for a mission trip to Guadalajara, Mexico on Sunday. Jill and Dillard are traveling with Cross Church College, the school Dillard currently attends in preparation to be minister. "Pray with us for our group heading to Guadalajara today," someone running the college's Instagram account captioned a snap of Dillard and Jill posing with a large group. And as you can see in the picture below, it looks like the couple's 8-month-old son, Samuel, will accompany them on their trip.

Although some people might wonder why Jill would bring her young son on an international mission trip, it's something she has done numerous times before. In fact, Jill's eldest son, 2-year-old Israel, spent his first years of life living in Central America while Dillard pursued missionary work. Unsurprisingly, Jill decided to homeschool Israel during this time because she didn't want to be separated from him in a new environment. The arrangement turned out to be extremely beneficial for both Jill and Israel, because they were able to learn Spanish together.

"It's not easy learning a new language," Jill wrote in a July 2015 blog post, according to The Inquisitr. "But one day soon, I pray I'll be able to communicated fluently and even dream in Spanish! I think Israel will pick up on it faster than us though...he is already becoming a local as he loves to nap anywhere there is a 'hamaca' (hammock)."

And Counting On cameras often showed Jill teaching Israel Spanish and encouraging him to engage with local kids his age. Joy-Anna Duggar, who would regularly FaceTime with Israel, said of his development at the time, according to People: “The culture in Central America is definitely influencing Izzy. It’s so cute just to see him growing up and doing all these different things."

But will Jill continue homeschooling her sons while on future mission trips? What about the boys' schooling while they're in Arkansas?

The answer to these questions is a bit murky thanks to Dillard, who happens to be a bit unpredictable, to put it mildly. Unlike Jill, Dillard attended Arkansas public schools and he graduated from a public university. Making matters even more interesting is that Dillard admitted that he would allow Israel and Samuel to attend college.

The slightly surprising admission surfaced on Jan. 21 after a fan questioned Dillard on Twitter, writing, "Will your boys ever get the chance to go to college? Yeah, I didn't think so." Dillard replied with a joke about his alma mater's rival school, saying: "Absolutely! As long as the school color isn’t red with a wagon mascot lol jk."

So, if it's possible that Dillard would OK college, it's not too ridiculous to assume that he'd allow his kids to attend a school outside of his home. In the meantime, however, it looks like Jill and Dillard will stick with homeschooling. Considering the two often travel on mission trips, it might be the best option for their family at this time.