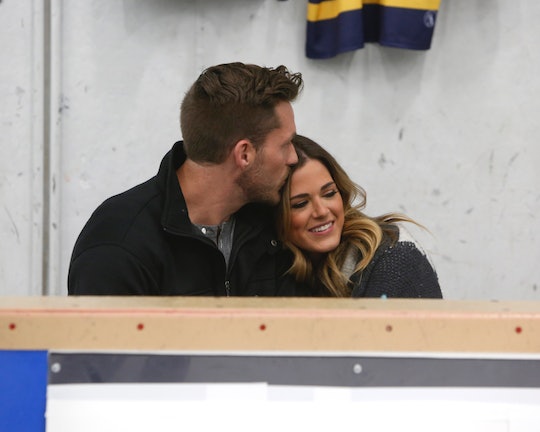 Does JoJo Pick Chase On 'The Bachelorette'? He Opened Up After His Hometown Date

Let's be real for a minute: JoJo Fletcher's season of The Bachelorette has not been particularly shocking. Jordan Rodgers and Luke Pell have remained at the head of the pack from the very beginning. The few tense moments — Chad's antics, Robby Hayes's ex-girlfriend, Jordan's family issues and allegedly sketchy intentions — haven't caused all that much drama. One surprise, though, is the other remaining contender, Chase McNary, who never seemed like a frontrunner to me and never stirred up any conflict. His own narrative has been complicated after the Hometown Date episode, though, so now I'm wondering: Does JoJo pick Chase on The Bachelorette?

I'm still firmly in the Jordan camp (based on the likelihood of him winning JoJo's heart in the end, as opposed to personal preference), but there's no denying that Chase really stepped up his game while visiting his Colorado hometown. Going into the episode, I was sure that Chase would be the contestant sent packing at the end of the night – after all, he was the one who had opened up to JoJo the least about his feelings for her, up to that point. While everyone else was throwing around "I love you's" in Week 6, Chase was all "I'm catching feelings akin to the emotion of love, maybe, I dunno." It was honestly baffling when sweet, forthcoming James T. was sent home and Chase remained.

But as Chase's segment of the Hometown Dates episode aired, I could distinctly sense a disturbance in the Bachelorette force. Twitter confirmed what I suspected: Viewers were becoming Chase fans, en masse.

The sudden love for Chase had a lot to do with his family backstory. Most of his hometown segment revolved around his background as a kid from a "broken home" – his parents had divorced years earlier, and said divorce apparently impacted him quite a bit. Chase explained that he found it hard to open up emotionally after that trauma, and just about every single member of his family echoed that when speaking with either Chase or JoJo.

Week 7 did more to humanize Chase than the entire rest of the season combined. Sure, Chase and JoJo had a few cute moments prior to the hometown visits ("blizzard-ing" by the fire place, sexy fake yoga, two-on-one tango lessons), but their connection always seemed to be on a very surface level. She was attracted to him (because, duh, he's gorgeous) and liked what she saw of his personality, but JoJo (and by extension the audience) knew virtually nothing about Chase.

Arguably, Chase was the winner of the Hometown Dates week. Every other contestant hit at least one sour note during their date – JoJo ended her day with Jordan by telling him that she still wasn't 100% sure about him, JoJo and Robby had that super awkward confrontation about his ex, and of course, JoJo was about to send Luke packing after their hometown. But Chase knocked it out of the park. He really laid all his cards out on the table for JoJo, and she was obviously super impressed. He even managed to tell JoJo that he loved her – finally. It's now just a matter of whether it was too little, too late.