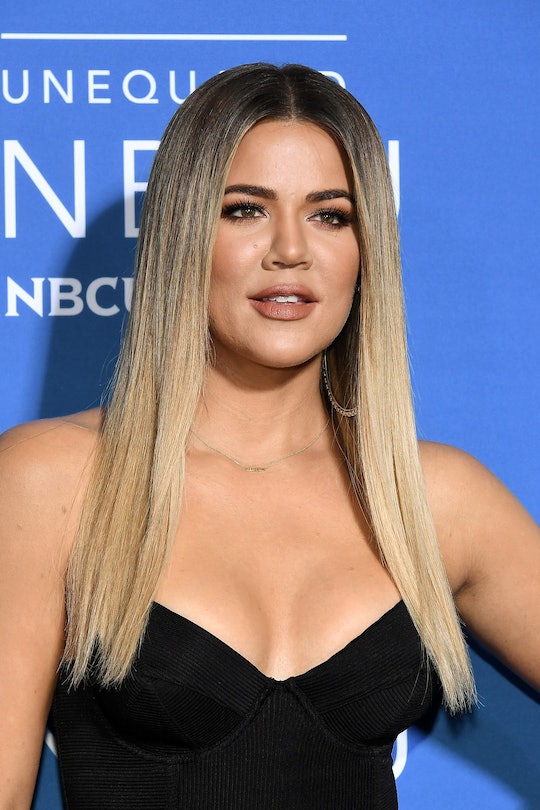 Does Khloé Kardashian Have A Nanny? Her Approach Is Slightly Different Than Her Sisters

Adjusting to new motherhood is no small feat, and when the most rich and famous amongst us are attempting it for the first time, it's not surprising that many opt to employ a small army of nurses and nannies to help them out. As the KarJenner sisters get older and start having families of their own, it's interesting to see how they go about managing their time and childcare needs. It begs the question for the newest mom in the brood: Does Khloé Kardashian have a nanny? Surprisingly, her approach seems to be a bit different than her sisters.

There's no right or wrong way to go about getting help as a new mom. Some people hire nannies, others have parents or siblings live with them for a period of time (shout out to Chrissy Teigen) while others do most of the care-taking on their own. According to a new report from People, Khloé is in the lattermost camp. "Khloé seems to like having someone with experience help her, but she still spends most hours of the day with her daughter," an "insider" shared, noting that though she was very "hands-on with her baby daughter," she's been receiving "support and company" as she adjusts to her life with baby True and Tristan Thompson in Cleveland.

It seems Kim Kardashian was more aligned with Kylie's approach, and she and Kanye reportedly have at least two nannies helping to tend to their new family of three. OK! reported that the family employs a number of people to assist them while Kim and Kanye work on music, filming, and other appearances. They noted that Steph Shepherd, Kim's former assistant, shared the following in an interview with Refinery29:

Kim now also has a personal assistant, a house assistant, two kids, two nannies, and I was recently promoted to COO of Kardashian West Brands, so we're looking for someone to fill my executive assistant position. Sometimes we look at each other like, wow, remember when it was just me and you?

As for Kourtney, Parents reported that she did have a nanny for Mason, but that she prefers to leave the kids with family members, or do the care-taking herself.

Khloé gave birth to her first daughter, True, on April 12. The delivery was all but eclipsed by the purported Tristan Thompson cheating scandal, in which The Daily Mail and TMZ released videos that allege to show Tristan having affairs with multiple women as Khloé was at his house in Cleveland waiting to deliver. Romper's requests for comment from both Kardashian and Thompson's reps regarding the cheating allegations were not immediately returned.

However, the most recent report from E! explained that Khloé was indeed giving Tristan another chance. An insider shared the following: "Khloe has given Tristan another chance at their relationship, and is trying to put the pieces back together for the sake of True. Although she is crushed by the scandal, Khloe desperately wants things to work and wants to have a complete family."Us Weekly also reported that in the time since, Tristan has been an amazing father to True, saying that he has really "stepped it up" in the wake of all the drama.

Of course, that could easily account for why Khloé has decided to take on most of the care-taking. What's important to remember is that everyone — yes, literally everyone — needs help with child-rearing in some capacity (it takes a village, remember?) and whether that involves hiring, helping, or even just sharing responsibilities is totally up to each parent and family. It seems right now, Khloé is just doing what is working best for her.