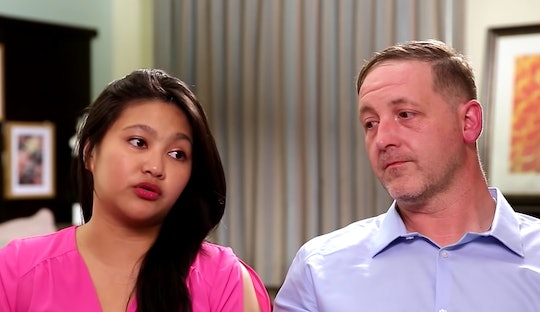 Eric and Leida did not get off to a great start on this season of 90 Day Fiancé. As soon as she walked into his apartment, it became clear that the two were very different people. That said, fans love keeping up with this couple and their evolving relationship — even off the screen. So, does Leida from 90 Day Fiancé have an Instagram?

Good news for Leida and Eric fans — they are both on Instagram. Under the handle @_aicohen, Leida shares plenty of posts about her life in Wisconsin, her man, and 90 Day Fiancé. Her Instagram has more than 2,000 posts and 22,000 followers, and she has been using the platform for a while. In fact on Thursday, Leida used her Instagram story to show that she and Eric were still a couple, and still living in Wisconsin, where he is from. This would imply that the two are now married, since their engagement could only last 90 days under Leida's K-1 visa. In the story, Leida shared a few videos from the couple's trip to a Wisconsin mall, where Eric bought her a pair of black Coach booties.

Looks like Eric has come a long way from the first day Leida was in America, when Leida told 90 Day Fiancé's cameras, "If Eric doesn't have a lot of money, that would make me go back to Indonesia."

Earlier this week, Leida used Instagram to remind fans that she was a runner up on Miss Indonesia by posting some steamy photos and videos as a message to her haters. She's also posted a bunch of photos with Eric, making it apparent that things are going well between them. "I love being crazy and silly with you," she captioned a recent selfie with him.

Leida has also proudly posted photos with her young son, Alessandro. "Meet me and my son, Allessandro. We live in Wisconsin. We’re cheese heads!" she captioned a cute shot of them together.

Leida and Eric are both single parents, and by the looks of it, their kids have spent a lot of time together. Based on Instagram, the couple has taken the whole family on multiple vacations.

Leida is really embracing the whole Wisconsin thing — she has called herself a "cheese head" in multiple Insta posts.

Alongside another selfie with Eric this summer, Leida wrote: "I love you no matter what! You and I are meant to be."

On 90 Day Fiancé, Eric works as an avionics technician, and he is also a retired armed forces member. But in July, Leida posted a photo of Eric in his military uniform. "This is not a cosplay. He’s getting back to the service. Come back soon, my love!" she captioned the shot.

Leida has made it very clear on her Instagram that things are now smooth sailing between her and Eric — and it will certainly be interesting to see how their storyline wraps up on 90 Day Fiancé.