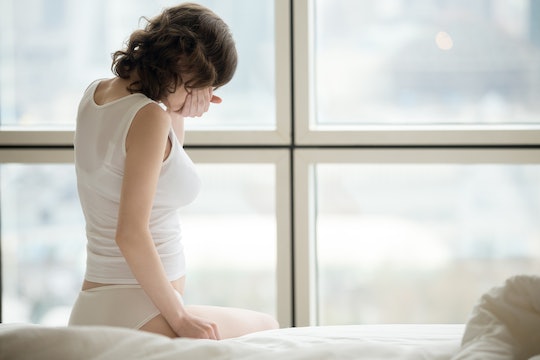 Everything You Need To Know About When Morning Sickness Actually Starts

Morning sickness is a hallmark of pregnancy in popular culture, and I hazard to say that 90 to 100 percent of television and movie characters realize they're expecting after a bout of vomiting. But in real life does morning sickness start immediately? Or is this another one of television's short-hands — like water always breaking in a busy restaurant?

Weirdly, morning sickness is a bit of a medical mystery, but scientists speculate that it has something to do with your changing hormones. Thus it makes sense that some women will feel morning sickness as soon as they get a positive pregnancy test, or about four weeks after conception, according to BabyMed. Pregnancy tests are built to detect the presence of human chorionic gonadatropin (hCG), the very hormone that might also be wreaking havoc on your digestive system. However, a majority of women won't experience morning sickness until sometime between weeks six and eight, according to Parents. Parents also reported that if you don't feel any nausea by week 14, the morning-sickness fairy will likely skip you altogether. In any case, once you come back with a positive pregnancy test, you can be sure that morning sickness is on its way within a few weeks or so.

"You may feel sick at any time during the day and many women actually feel sick later in the day. Morning sickness usually sets in soon after you realize you are pregnant, and you’ll probably start to feel better toward the end of your first trimester. However, some women continue to feel sick throughout their pregnancy. Or, their nausea stops and may come back later."

For me at least, morning sickness wasn't like flipping a switch. It came on gradually. For at least a week I had a strong preference towards yellow and beige foods. Then, one night, I couldn't choke down my prenatal vitamin. Finally, around week 10, vomiting hit like a Mack truck. The goods news here is that by my second trimester, the mysterious misery was gone, and I was craving shrimp again. I can also thank my lucky stars that I didn't suffer from hyperemesis gravidarum, a severe form of morning sickness that can last until delivery.

One symptom that often comes along with the nausea is the bone-crushing fatigue, which for me also came on gradually throughout the first trimester. And honestly, while it did abate, the sense of physical exhaustion never entirely went away. "Your body is working hard to adjust to your growing baby," notes Krumwiede. "It’s important to listen to what your body needs. This often means more sleep and rest. Normal, everyday tasks may fatigue you sooner and more easily. You may want to take naps throughout the day or go to bed earlier at night." She notes that most women feel a return of energy in the second trimester.

To manage the symptoms of early pregnancy, eat small, frequent meals, suggests Krumwiede, and try consuming ginger, or wearing a sea-band. I can also personally recommend those chewable prenatal gummies if you're having trouble keeping your vitamin down. (Why do they even make the other kind? The gummies are delicious. Just don't eat too many — the sugar won't help your nausea). While it's possible that you'll be eating cereal with bananas from week four of your pregnancy onwards, you're far more likely to experience morning sickness after week six, when your baby is visible in an ultrasound, and things start to get real.