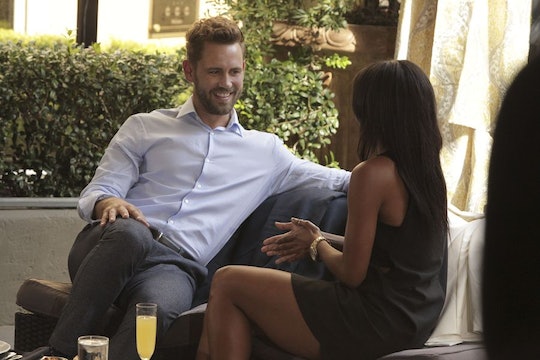 Nick May Make The Most Surprising Choice Of All

It's pretty much a given that every season of The Bachelor will be more dramatic and jaw-dropping than the last. That's how they've stayed so successful for 15 years, and Season 21 has been no different, with surprise eliminations, sometimes no eliminations at all, and Nick Viall crying on more than one occasion. The latest big twist is his ex, Andi Dorfman, showing up unexpectedly to talk. So does Nick choose no one on The Bachelor?

In a People clip regarding the big showdown that's still to come between Nick and Andi on The Bachelor, Andi brings up their stressful past and whether or not he regrets revealing their sexual history on television during the After the Final Rose special of her season. She then points out how now he's in a similiar position as she was. But when Andi comments that Nick will be sending home a total of 29 women, he responds by saying, "Maybe 30," suggesting that there's a distinct chance he doesn't pick anyone in the end.

It wouldn't be the first time Nick tried to amp up the shock value, though, as far as a happy ending is concerned. All season long he's been voicing his supposed doubts about his feelings for each woman and while it's good that he's taking the time to really evaluate each relationship, we all know that there's no way the Bachelor producers are going to let him leave without getting down on one knee.

In an interview with E! early on in the season, Nick had opened up a little more about the outcome of Season 21 of The Bachelor, but since this is Nick's fourth time looking for love in Bachelor Nation, he knows how to keep his mouth shut and was therefore careful not to reveal any spoilers about how this all ends. He told the outlet that he's "Possibly, maybe, with someone. And possibly not." So, you know, that's helpful.

He went on to say that, as with former Bachelor Ben Higgins who fell in love with two women during his season, that "May or may not have happened" with Nick, too. The guy is full of maybes right now, so I guess the producers are the only ones allowed to spoil things — like announcing Rachel as the next Bachelorette earlier than usual.

Luckily, we won't have to wait much longer to see who Nick does or doesn't send home as the fantasy suite dates get closer and more women get sent home. But will Nick send home all of the women on The Bachelor at the end of all this? If the past seasons are any indication, probably not, but never say never on this show.