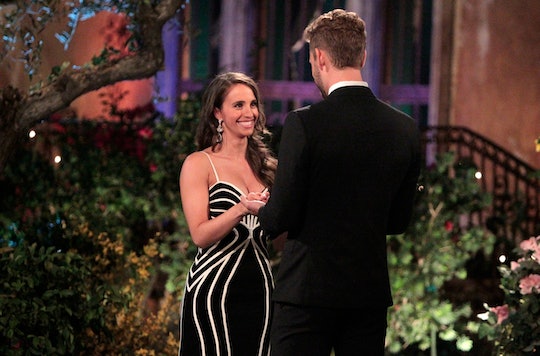 In every season of The Bachelor, there are at least a few frontrunners that emerge early on and make themselves known as the ones to watch. On Nick Viall's season, there were several women that clearly had chemistry with the three-time Bachelor Nation alum right off the bat. Rachel Lindsay won the first impression rose, and after her New Orleans one-on-one she seemed like the contestant to beat. But news that Rachel is the next Bachelorette have made it clear that Nick's final rose is Vanessa Grimaldi's to lose. Social media clues that Vanessa wins The Bachelor have me all but convinced that the special-ed teacher and Nick are currently engaged.

Now I know what you're thinking. During last Monday's episode, Vanessa confessed to Nick that she was falling in love with him. Nick didn't reply in kind and Vanessa, with the no-nonsense attitude that's made her a fan-favorite, was vocally upset about it. To a casual viewer, that might seem like a sign that Nick and Vanessa aren't meant to be. In my view, though, this is a classic Bachelor misdirect. Vanessa is such an obvious choice for Nick that there needs to be some kind of tension that makes her win come off as a surprise. It's similar to the tension between Jordan Rodgers and JoJo Fletcher on her season of The Bachelorette last year, after he didn't initially ask her parents for their engagement blessing... right before she picked him anyway.

Despite Monday's awkward lack of an "I love you," I'm still putting my money on Vanessa as the season's winner. Here are some social media-derived clues to back that up.

Some commenters on this Instagram video of Vanessa getting up close and personal with Panettone swear that you can see the hint of a ring on her left ring finger. As a person who has now watched this clip approximately 47,000 times, I can confidently say that there's something glinting on her left hand. If she's engaged to Nick, it's a Neil Lane original sitting on that finger.

They're Both Dedicated To Their Families

Nick and Vanessa are both clearly family people. They've each posted tons of photos hanging out with their families back home, since the show wrapped filming back in November. Nick's little sister's cameo appearance made it obvious that he's close with his siblings, much like Vanessa appears to be.

She Totally Posted A Skype Screenshot

Go ahead and just try to tell me that this selfie wasn't taken mid-video call. Vanessa shared this casual shot on Jan. 9, just a week after the premiere. The timing totally fits for this to be a call between the probably-engaged-now couple.

They're Being Very (Suspiciously) Nonchalant With Their Posts About One Another

The natural reaction, when you're recently engaged, is to shout it from the rooftops. Instead, since they're contractually obligated to keep the news on the DL for another month, Nick and ~whomever~ his eventual fiancé is would have to be low-key about their relationship. Vanessa captioned this photo "Nick and me in Bimini (say that really fast 6 times)" – not particularly mushy and lovey. Perhaps that's on purpose.

She's Been Jet-Setting Around Since Filming Wrapped

The Canadian native took a trip down to Nashville to hang out with some of her fellow contestants. Taylor Nolan, Kristina Schulman, and Danielle Maltby all appeared in her photos. In terms of flight time, Nashville is a pretty perfect midway meeting place for Nick (based in California) and Vanessa (in Montreal) to have a surreptitious secretly-engaged rendezvous.

At this point, the choice is really down to either Vanessa or Raven Gates. Corinne is basking in her Bachelor villain fame post-filming and running with it (not typically something season winners do), and Rachel is the next Bachelorette. Raven is definitely a sweetheart, but her chemistry with Nick doesn't seem nearly as on par with what we've seen of his relationship with Vanessa. That Zero G gravity date alone pretty much sealed it.