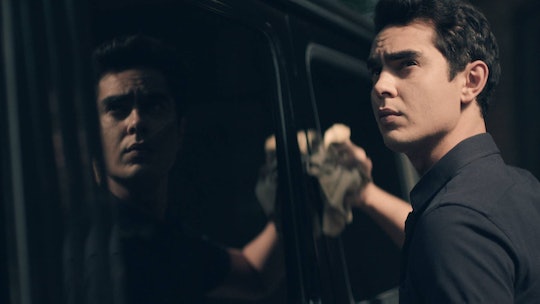 Nick's Fate On 'The Handmaid's Tale' Doesn't Look Too Good

On an intense show like The Handmaid’s Tale, a character can only last so long before their crimes or misdeeds catch up to them. Much like Janine being sent to The Colonies, Emily being mutilated, and now Serena being whipped for her crimes against her husband (insert obvious eye roll at that one), those who try to do some semblance of good in Gilead always seem to pay for it. So does Nick die on The Handmaid’s Tale this season? As of late, he’s taken a whole lot of risks in order to not only protect himself, but also protect June and their unborn baby. So far, he’s been able to keep them safe, but after Wednesday’s episode and his child bride Eden’s increasing meddling, the walls might soon be closing in on him.

In the upcoming episode nine, it looks like Fred and Serena are going to be traveling to Canada as diplomats for Gilead and in the promo, Moira recognizes Fred onscreen and tells Luke as much. If there is to be an interaction between Luke and Fred or at least Luke and Nick, then it could mean bad news for Nick. That’s not to say in a violent way, but if Luke finds out who Nick is to June, to his wife back in Gilead, then who knows what he could do with that information out of jealousy or just pure desperation?

There’s also the whole matter of the scene in the season two promo that shows two people drowning in a pool. The clothes look like that of an econo-couple and could very well be Nick and Eden since they’re now essentially the middle class of Gilead. While at the moment Nick seems to be out of harm’s way and still working as an Eye and as Fred’s driver, things could change. He might find himself being punished, along with Eden, who really hasn't served much of a purpose so far other than to complicate things a bit.

Speaking of which, in Wednesday's episode of The Handmaid’s Tale, "Women's Work," Eden discovered the stack of letters that Nick took from June, which were from the handmaids who’d written them to describe their families and personal stories. Although Eden insisted that she didn’t read them — which could very well be the case since she’s so painfully pious — the fact that she even knows about a secret that Nick is keeping could be damning for him.

Nick should also probably treat Eden a little better if he doesn't want her to turn against him. She might be more than ready to please him as she’s been trained to do. But with her intense look after he brushed her off for the first time in "Women’s Work," it did seem like she might not be a very good ally for him if he keeps neglecting her. June did point out earlier in the season that even not sleeping with Eden would be considered breaking the law, so there are probably a number of ways she could turn against him, if given a reason to do so.

There’s still a handful of episodes left of season two, so Nick could very well come out of it alive and on top, but there really are a lot of factors which could contribute to his untimely and totally tragic death by the season finale. He worked with Serena to go against Commander Cushing and falsify documents in order to have him arrested, which seemed to fix their immediate problem of the nosy commander, but in the long run, it could mean a big blow-back on Nick somewhere down the line. Since we only saw Cushing carted away and not shot on the spot, he could pop up again before the season is through.

It’s hard to tell if that means Nick will eventually meet his demise this season or at the end of the season, but for right now, he’s June's only lifeline and hope at escaping Gilead, so let’s hope he can hang on for a while longer.