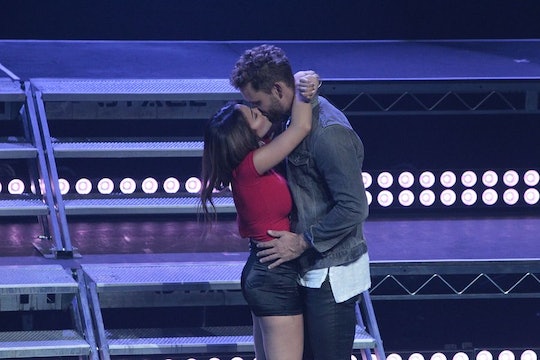 Are Nick & Danielle L. Meant To Be?

The contestants on Season 21 of The Bachelor have already dwindled down to 17 and while that might still seem like an awful lot, compared to the 30 women the season started off with, this is starting to get serious. From the beginning, though, it's been a guessing game of who Nick ends up with in the end and with Danielle L. being one of the remaining contenders who seems to have caught the Bachelor's eye, one can't help but wonder, does Nick end up with Danielle L. on The Bachelor? After she won the chance to dance with him on-stage as they were serenaded by the Backstreet Boys, she was safe for the night, but what about the rest of the season?

Their special moment (and first kiss) was part of their semi-awkward middle school slow dance, but it was also kind of sweet and possibly the beginning of something good for the would-be couple. (Also, are they considered a couple, since Nick is technically "dating" each of these women at once? Let's not go there.) But does this group date victory for Danielle L. mean that she has a real future with Nick now? It might be too soon to tell, but with each passing week, more of the women are going to be eliminated, making it all the more possible for Danielle L. and Nick to form a real bond. Still, there are some big contenders this season.

If I had to go by everything in Danielle L.'s Instagram, I would venture to guess that she and Nick don't end up together on The Bachelor. While their dance and make-out session at the concert were both genuine and actually pretty cute, there is some legit competition this season. And it also looks like, according to Danielle L.'s social media accounts, she's been traveling an awful lot. I know Nick and his bride, whoever she may be, aren't supposed to let the reveal out until the season has aired in its entirety, but there isn't much to suggest that Danielle L. and Nick are together after The Bachelor.

Back when The Bachelor was still filming and the Backstreet Boys group date excursion was playing out, People spoke to Danielle L., Christen, and Whitney about their experiences so far in Season 21 and Danielle L., obviously on a high after her kiss and dance with Nick, was totally smitten. "The thing about Nick is he’s so honest and upfront with his emotions and he says what’s on his mind," she said. "When you’re as receptive as he is, it’s easy to build a romantic relationship."

Even if Danielle L. forms a solid relationship with Nick during Season 21 of The Bachelor, though, it still doesn't mean that they'll end up together in the end. At this point, it's anyone's guess, but I'm anxious to see how this potential romance plays out.