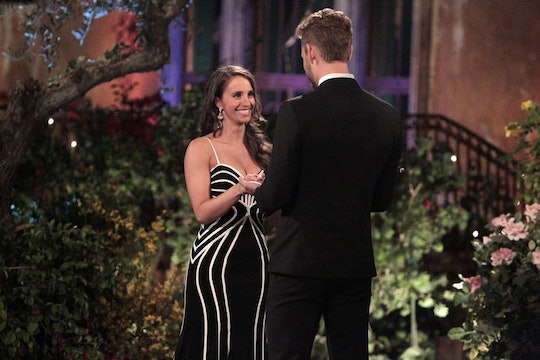 Nick & Vanessa Could Be The Perfect 'Bach' Fit

It's never easy to judge who the favorites of The Bachelor or The Bachelorette will be and for Season 21, that difficulty is no different. At least, it's never made easier until a few weeks have passed and fans can start to see some real connections come to light as opposed to premature declarations of love. But a few woman have stood out so far this season, including Vanessa. But does Nick end up with Vanessa on The Bachelor? She's definitely his type and from the looks of it, he noticed that fact right off the bat himself.

For the most part, the women Nick has gone after in Bachelor Nation have been of the beautiful brunette variety with long hair and the ability to actually hold a conversation. There was his brief attraction to Amanda Stanton on Bachelor In Paradise, but that can be forgiven, since later, he met and connected with Jen Saviano. And the latter was, of course, exactly the type fans have come to recognize as Nick's preference in women. But just because Vanessa fits the description, is that enough to mean that Nick and Vanessa end up together on The Bachelor? It might be too soon to tell, but in another way, there have already been some clues.

In addition to having the same long brown hair as Jen from Bachelor In Paradise, Vanessa also bares a resemblance to Nick's former potential partners on both of the seasons of The Bachelorette he was featured in. During Season 10, Nick got close to Andi Dorfman and even made it to the final two, where she sadly let him go, as she was more deeply in love with Josh Murray instead. Then, during Season 11, Nick showed up as a sort of surprise, well after the premiere episode, and Kaitlyn Bristowe allowed him to stay. The brunette beauty was also so enamored with Nick that she kept him around to the final two, where she also let him go before he could propose.

On Vanessa's Bachelor bio, she said that in an ideal mate, "I don't really have a type, but a great smile is definitely necessary," and it can be argued that Nick's smile is as infectious as his nervous and awkward mannerisms. She also said that her family's opinions of the men she dates is extremely important and Nick, coming from a large close-knit family, would appreciate that philosophy.

It also helps that the Bachelor called her a keeper after their brief first meeting, and instead of all of the bells and whistles of a gimmick to help Nick remember her later in the night, they were able to meet as two seemingly normal people. With an entire camera crew around them, of course.

She's Smart & Has A Lot To Offer

Although Vanessa has prior TV experience, via brief acting stints on shows like Being Human and Blue Mountain State, the Montreal, Quebec native currently works as a special needs teacher. So not only does she have an education herself, but she's chosen to use it for a noble profession. Being able to hold a conversation with the Bachelor is one thing, but bringing an admirable profession to the table puts her on a whole other level. Any contestant can (and usually does) try to connect with the Bachelor on a purely physical level, but the whole point of the show is to find a partner for life and Vanessa has more to offer than just something physical.

She's At A Reasonable Age

Having younger, 20-something contestants on The Bachelor isn't new, but this season, it feels a little off. It might be because the Bachelor himself is 36, but having four 23-year-olds, five 24-year-olds, and seven 25-year-olds among the contestants makes them feel even younger than usual. Vanessa, at 29, is an adult who is likely ready for an actual commitment and (hopefully) not looking to use The Bachelor as a way to help a modeling career gain some footing.

Typically, by the second week of The Bachelor, things are still getting settled and no one can really predict the winner just yet. But Vanessa and Nick seem like they could have a real shot.