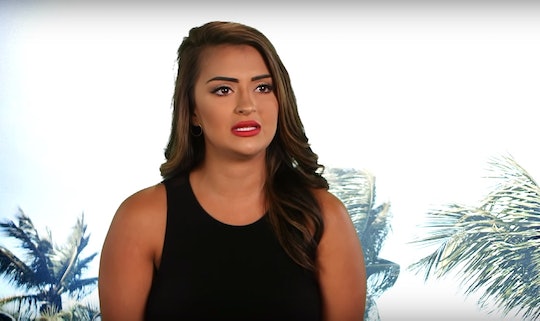 Josh's Return On 'Floribama Shore' Should Spell Trouble For Nilsa

The season is coming to an end, but the Floribama Shore relationship drama is not. Jeremiah’s brother is about to arrive at the house to shake things up one last time and drive Nilsa bonkers. At the end of last week’s episode, she was already worried about her former beau’s arrival, leading some fans to wonder if Nilsa hooks up with Josh on Floribama Shore again. Their short-lived fling last season had Nilsa ready to make things official, but it fizzled out quickly when Josh saw her contact with her ex-husband as a bad sign for their future. After Josh and Nilsa "hunched" (the Floribama Shore version of "smush"), he returned to the house for their first official date. But after Nilsa admitted to having spoken to her ex two weeks previously, Josh nipped their would-be relationship in the bud right there.

"I don't want to go on this date, to be honest with you," Josh told her at the time. "You don't really sound like a girl who wants a serious relationship if you're calling your ex just to talk. It sounds like a red flag to the max." Judging by Nilsa and Gus’ summer romance this season, I would say that she’s as over her ex-husband as she could get. And if that’s the case, Josh could make a move on her. Especially since he’s going to be with the gang on their last night in Panama City Beach.

I don’t know if I see Josh and Nilsa moving beyond a drunken hookup on Floribama Shore, if anything, but if they’re both single, I wouldn't be surprised if there is some heavy flirting at least. Nilsa might not have any interest in Josh right now, but after a few drinks and after he turns on the charm, he may be the easiest person to spend the night with after an evening of drinking.

Of course that opens the door for more Gus drama, just when we all thought that was finally over. If Josh and Nilsa hook up, Gus might finally reveal some deep feelings for her with the worst timing ever. I know all too well the trouble in insisting that you’re over someone and have zero interest in them until they show up and all of those old feelings come rushing back. I honestly wouldn't blame Nilsa if that happens with Josh when he comes back to the Floribama Shore house, even if she doesn’t want it to.

Although it’s hard to say if Nilsa and Josh hook up or not before the season is over, she might have moved on from him completely. They were never really a *thing* beyond their one night of "hunching," that stuffed unicorn he gave her, and their planned putt-putt golf date. After that, whatever they had between them dried up pretty fast. If Nilsa really is over him, then his visit to the house could be more drama-free than the entire season has been as a whole.

I’m also a total Nilsa and Gus shipper. They made it clear in Mexico that they were putting the brakes on their romance, but on Floribama Shore, there’s always the possibility that they might get back together or that they might catch feelings for each other again at some point. Bringing Josh into the mix certainly makes things tricky, but it could be the wakeup call Gus needs.

Season 2 of Floribama Shore has felt more like two seasons combined because of all the different storylines and fighting. Let’s just hope that the housemates can end the season on a high note instead of with more drama.