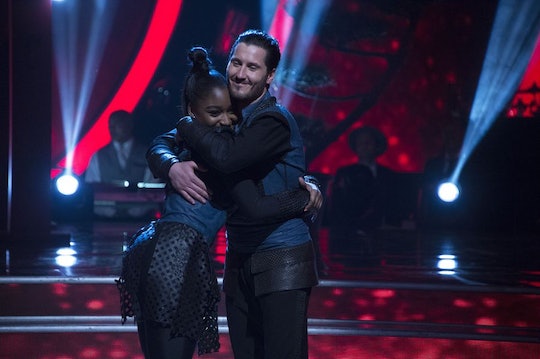 Normani Kordei Is No Stranger To Dancing

It’s sort of crazy to think that Season 24 of Dancing With the Stars is already at its halfway mark and there have been so many legitimate good dancers competing this season. Naturally, the born performers like Erika Jayne and Normani Kordei’s own dance moves shined through, but does Normani Kordei have dance experience? Dancing With the Stars asked the Fifth Harmony member to be part of the show right in the middle of the group’s tour, but Kordei still accepted the opportunity, so she’s definitely not afraid of hard work.

But when you’re a singer/dancer in a super successful girl group, how hard is it to compete on a show like DWTS? Even though the show has still brought something new to Kordei, who’s learned more salsas than choreographed group dancing, she does have dance experience prior to DWTS. But again, she definitely hasn't been the only established performer this season, so it’d be unfair to hold any of her experience against her. Plus, this type of dancing is very different from what she's used to, so it still brings her out of her comfort zone.

Even though Kordei competed on Season 2 of The X Factor and walked away as part of Fifth Harmony and has since been a strong member of the multi-platinum selling group, there’s still a big difference between singing and dancing on-stage at concerts and learning the paso doble.

In her weekly blog for Hollywood Life, Kordei wrote about how hectic the season was starting out, with traveling across the world and back to be able to participate in her band’s shows in Japan and DWTS. But throughout it all, there’s definitely been a learning curve for her.

Right before Week 3’s Vegas Week on DWTS, Kordei wrote, "Having to learn new routines, having to do a soundcheck, having to perform for thousands of people… and also having to make my flight to make sure I make my live show each and every Monday, has been insane. But I’m grateful and blessed — not many people are able to say they get to do what I do."

It’s been a juggle for the star for sure, but thanks to the scores she received after her Week 5 routine with Val Chmerkovskiy (which was 39/40, thank you very much), fans are likely wondering what kind of dance experience Kordei has.

According to an interview with Complex, Kordei has been dancing since she was three years old and in 2015, she released two separate videos in which she dances, sans the rest of Fifth Harmony, to Future's "Commas" and then “Do Not Disturb” by Teyana Taylor. Kordei also said in the interview that she found her love of dance before her love of singing. "Dancing was my first passion so it definitely was most important," she said. "I would always sing and dance around my grandma's living room."

Although she’s known best as a singer these days, dancing has been a huge deal to Kordei for years. "In those early years dance became a part of my identity and helped shape who I am today," she told the outlet in the same interview. "Dancing is more than just moving body parts, it is a pathway of expressing your deepest inner thoughts. When I dance I escape the present and become one with my soul."

Even though Kordei already has dance experience, though, that doesn’t mean that competing on DWTS is a cakewalk for her. If nothing else, she’s been able to use the form of expression as a way to set a good example, as Julianne Hough called her a great example for little girls after her number during Disney Week. It’s hard to deny how good Kordei is, but DWTS is still about learning so much for all the contestants, regardless of their previous experience.