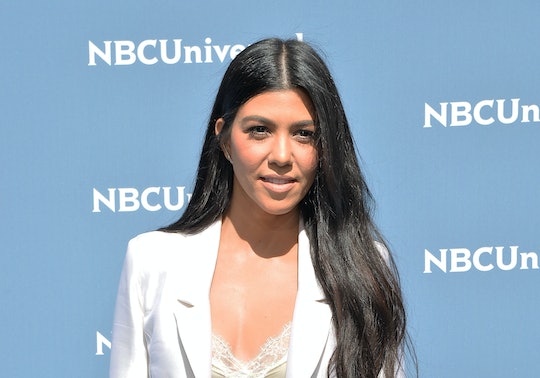 Kourtney Kardashian might have a very unique and fabulous life that allows her to travel and walk red carpets and such, but her three children actually lead very normal ones — and that includes school, of course. So if you're wondering whether her kids, such as Penelope Disick go to school and do homework like every other kid, the short and simple answer is "yes."

This fact was recently evidenced on Monday, when Kourtney's younger sister, Kim Kardashian, posted a photo of her 5-year-old daughter, North, standing next to Kourtney's 6-year-old daughter, Penelope. In the photo, the two girls can be seen wearing matching school uniforms, while the moms opted for some athletic clothes to drop their daughters off at school. "Spring break is over," Kim captioned the photo, along with book and pencil emojis.

This may have led many to wonder if the two girls attend the same school. Not much is known about the private lives of the KarJenner grandchildren, according to the Daily Mail, for a good reason. Remember: they are young children and didn't choose to grow up in the public eye — thus, there are some things about their lives that have to be kept private, which should be respected.

But since Kourtney's daughter was wearing a school uniform, and Kim hinted that the girls had been on spring break (presumably from school), it seems safe to assume that Penelope does attend school. But it's just a little unclear if Penelope is in the first grade or in kindergarten.

Kourtney has also been seen dropping her youngest son, Reign, off at daycare, which also points to her kids attending school. On top of this, Kourtney stated during an episode of KUWTK last year that she drops her kids off at school, and would be a full-time mother, if she could afford it.

"If I had enough money, I wouldn't work," Kourtney said in the episode. "I wouldn't do the show. I would be a full time mom. That's what I want to do. The guilt I carry every day from not being at home when they get back from school, not doing homework — my kids suffer."

Kourtney reportedly said that she was homeschooling her oldest son when he was in kindergarten four years ago, according to Baby Gaga, but she hasn't publicly said anything about that in a while. And based on Penelope's strict uniform (which she dressed up with Gucci loafers, according to Page Six), that doesn't look like an outfit that a kid would wear to be homeschooled.

It makes sense why Kourtney would want her kids to be in school — she attended an all girls Catholic high school, according to Us Weekly, and attended college at Southern Methodist University for two years before transferring and graduating from the University of Arizona, according to Nicki Swift. What's more, Kourtney graduated with a degree in Theater Arts, according to Glamour, so she obviously values education.

And it makes complete sense that North and Penelope would be attending the same school, together. The two cousins are best friends and completely inseparable — every year, the two girls have a joint birthday party (since their birthdays are a little less than a month apart), according to Entertainment Tonight. And since they're so close, it probably makes school just a bit more tolerable for them.