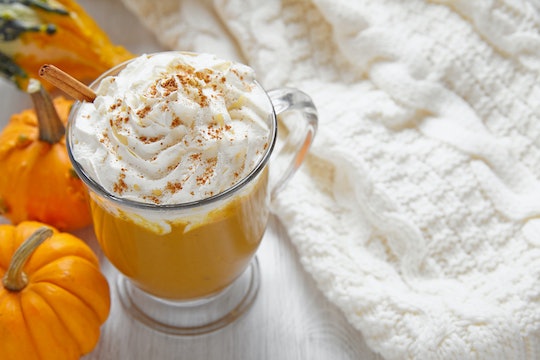 I'm not going to lie. I freaking love me some pumpkin spice. I buy all of it, from the oatmeal to the lattes, and yesterday, I ordered a pumpkin-scented candle so now I am basically the white girl embodiment of Autumn basic-ness. But do the magical properties of pumpkin spice end there? Some believe the autumn favorite can help their baby enter the world a little quicker, but does pumpkin spice induce labor? If so, maybe I don't need to take those cookies I just baked over to my pregnant study partner's house.

Pumpkin spice is everything right now, from the ubiquitous latte to lotions, soy milk, candles, cereal, and probably sexual lubricant for when you really just want to get down with fall. Its inevitable glide into our conscious starts around late August and keeps going strong until gingerbread takes its rightful place as the best seasonal flavor ever sometime around Thanksgiving. (It's not a contest because there is no contest. Gingerbread is just better. Deal with it.)

Pumpkin spice is often derided as the the lowest common denominator amongst seasonal food loving people, coupled with things like yoga leggings and furry boots, but it's been around since way before it ever mixed with espresso and steamy, foamy milk.

Pumpkin pie, or at least a facsimile of it dates all the way back to the Plymouth Plantation Era — around 1621, according to What's Cooking, America. That's nearing 400 years of delicious autumnal goodness. But did those early puritans use the pumpkin spice formula to do more than just sweeten their dinners? Can pumpkin spice induce labor along with making my home smell like crunching leaves?

According to the Global Library of Women's Medicine, the induction of labor through natural and mechanical means is even older than our precious pumpkin spice offerings. The article noted that the induction of labor has been recorded since the second century, when Hippocrates wrote about "mammary stimulation" to induce labor. I am definitely imagining an old, bearded, white haired Greek philosopher stimulating some woman's mammaries saying "it's all in the name of (insert ancient Greek word for science here.)" And he wasn't wrong. This wasn't blood letting or baths in lye — this is a viable technique used to this day, in fact.

Fast forward 1400 years, and even with the advent of the magical pumpkin spice and early modern American midwifery, we don't see the use of spices to induce labor, noted Midwifery Today. Instead, they relied heavily on preparations of castor oil or mercury-based products that either made you heave or made you cramp with diarrhea, which then caused your body to go into crisis and jumpstart your labor. Thank goodness we've learned not to do that.

But will the individual spices in the pumpkin spice induce labor? There simply isn't research to suggest that any spices will work to induce labor. Sure, there are tons of old wives' tales about magical eggplant parm, or other spicy foods that supposedly will bring on the birth of your child, but they're not backed up by peer-reviewed studies or hard evidence of their effectiveness. Beyond that, the herbs that do have some labor inducing qualities are either not found in your pumpkin spice latte, or they're deemed unsafe for use, even if they do work.

That doesn't mean you can't try out a few pumpkin spice recipes if you love them and hope for the best. They're delicious and they're really comforting. While they may not lead you to the path of instant labor, there might be a placebo effect for you. Pumpkins are full of fiber, beta carotene, and vitamin A, so at the very least, you can say you're doing something healthy for your baby when you're baking pumpkin loaf or making pumpkin ravioli, right? 'Tis the season.

More Like This
Everything You Need To Know About Postpartum Blood Clots
All Your Questions About Getting Pregnant After A Tummy Tuck Answered
Breaking Down The Different Types Of Postpartum Infections
Can The Way You Sleep Really Turn A Breech Baby?