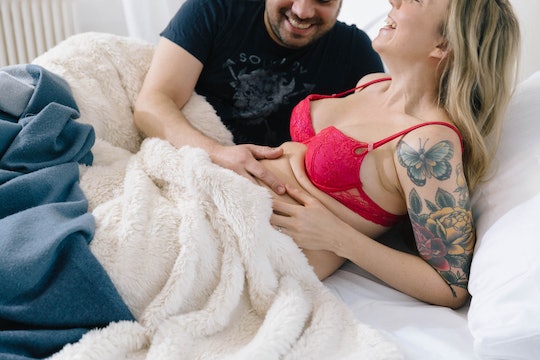 Turns Out, Sex Can Get Better When You're Pregnant, According To Science

I remember my first pregnancy well. Thanks to being gifted with a morning sickness that just wouldn't quit, and a really fun type of neuropathy that made patches of my skin painful to touch, I was miserable. My second pregnancy, though? I was a changed woman, and my arousal was off the charts. I took advantage of it, especially with all that increased sensitivity, but does sex get better when you're pregnant? Turns out, the answer is not universal.

According to Our Bodies, Ourselves, sexual desire during pregnancy runs the gamut between non-existent and a rabbit during mating season. The reasons are fairly complex for this spectrum of sexual need. First, not everyone is going to respond to the effects of hormones in the same way. For some women, myself included, pregnancy isn't always this miraculous thing that happens, rather it's something to endure.

Some women, however, enjoy the rush of blood flow, and the increased lubrication, and extra sensitive nipples, according to the University of California, San Francisco. These are just symptoms of pregnancy, but they can attribute to some of the best sex of your life when you're pregnant. Does sex get better when you're expecting? It definitely can.

The changes that happen in your body with pregnancy are such that they can swing the pendulum in either direction. Not only that, many men find pregnant women very attractive. Perspectives on Sexual and Reproductive Health suggested that this is an evolutionary imperative that assures the continuation of the species. It is a biological mechanism put in place so that men continue to play fast and loose with their reproduction.

However, if your pregnancy makes you feel crummy, and your sex drive isn't as great as it was before you got pregnant, that's OK, too.

My pregnancies were night and day. While the first trimester is never something I do well, when I got into my second trimester with my second pregnancy, I felt renewed. I felt strong and sexy, and most of all, ready for sex. My husband was into it, too. I mean, who wouldn't be into their wife diving into their pants just as soon as their toddler fell asleep?

It was honestly some of the most intimate and pleasurable sex of my life — something I couldn't have dreamed of during my first pregnancy. If you're concerned about your level of arousal, or lack thereof, there is no shame in talking to your provider and your partner about what is going on. Pregnancy is a strange time in your life, and you'll need all the support you can get — even if that support is holding up your hips so your belly doesn't pull you down into the mattress.