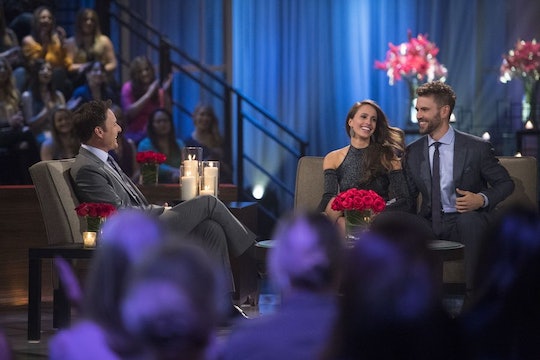 Vanessa Has Spoken Out About Starting A Family

For the most part, the cameras have stopped rolling for the couple and Nick finally got to propose to a woman who said yes. By all accounts, Nick and Vanessa should be ecstatic, but there are still some burning questions fans are curious about. We all know their very different locations was the main issue they struggled with before Nick put a ring on it, but now that they’re engaged, does The Bachelor winner Vanessa want kids?

The Bachelor winner has actually been pretty open about that, as has Nick himself. In an interview with Extra, Vanessa said that even though they’re taking things super slow as a couple, they have talked about kids. “We know we already both want kids,” Vanessa revealed. And then of course Nick had to add a cheeky, “We've gotten that far. Lots of safe practice.”

Even though some fans noted the new couple’s kind of awkward behavior on After the Final Rose, you can probably chalk a lot of that up to being genuinely unsure of how to be around each other in public. Life after The Bachelor seems pretty weird to get used to overall. First, they were filmed constantly, and then they had to keep things tightly under wraps after getting engaged. Months later, they’re finally allowed to go on dates in public, so of course things are going to feel a little strange at first.

The idea that Vanessa wants kids isn’t really a surprise since, like Nick, she comes from a big family and a close-knit one at that. Nick is also one of 11 children in his family, whose ages span from 11 to 37 and although he seems to be having fun making the interview circuit and gearing up for Season 24 of Dancing With the Stars, he made it clear that he wants them, too.

During the hometown dates on The Bachelor this season, viewers saw how close Vanessa and her sister are and by now it’s a known fact that Nick values his younger sister Bella’s opinions, so they definitely share a love for familial bonds. The only big hurdle is getting Nick and Vanessa’s wedding to actually happen.

The newly engaged couple told Access Hollywood that if the opportunity arises and they’re mentally ready at the time, then they would consider a televised wedding, so basically, it could totally happen if they have intentions to actually get married.

You have to give Nick and Vanessa credit for sticking to their plans to take things slowly and right now it seems like the big goal is getting used to life as a real, solid couple. But I think it’s a no brainer that their kids would be gorgeous.