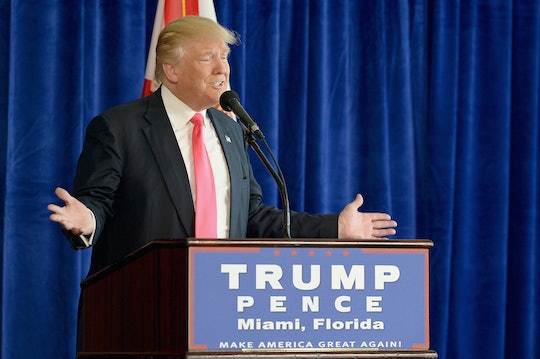 Does Vladimir Putin Like Donald Trump? They Both Weirdly Respect The Other's Power

Republican presidential nominee Donald Trump has had seemingly odd, and confusing ties, played out in the media, to Russia and President Vladimir Putin. But during a press conference on Wednesday, Trump articulated a charge to Russia that pushed the questionable Trump-Putin-Russia relationship to new heights. The presidential nominee encouraged Russian hackers to hack into the email server of Democratic presidential nominee Hillary Clinton. With a charge like that, one must wonder: does Putin like Trump? The two have reportedly expressed mutual feelings.

Back in December, Reuters reported that Putin referred to Trump as "an absolute leader" during a news conference to reporters.

“He is a very flamboyant man, very talented, no doubt about that," Putin said according to Reuters. "But it’s not our business to judge his merits, it’s up to the voters of the United States." He continued, "He is an absolute leader of the presidential race, as we see it today. He says that he wants to move to another level relations, a deeper level of relations with Russia. How can we not welcome that? Of course, we welcome it."

Prior to Putin's remarks, Trump had noted that he'd "probably get along" with the Russian president "very well."

And if those comments of mutual admiration aren't eyebrow-raising on their own, Trump's interview with The New York Times earlier this month definitely seals the deal. Trump claimed that if President, it's possible that he wouldn't defend the United States' allies in NATO against an attack from a foreign power like Russia, should an ally not "fulfill their obligations" to pay the bills. "You can’t forget the bills," Trump told The Times. "They have an obligation to make payments. Many NATO nations are not making payments, are not making what they’re supposed to make. That’s a big thing. You can’t say forget that."

But on Wednesday morning during a press conference, Trump addressed Russia directly in response to speculations that Russian hackers were involved in the 20,000 emails published by WikiLeaks, revealing an internal bias towards Clinton, and against Vermont Sen. Bernie Sanders, as the party's nominee. Trump then said he hoped Russia could "find the 30,000 emails" that were deleted on Clinton's private email server.

"Russia, if you’re listening, I hope you’re able to find the 30,000 emails that are missing,” Trump said. “I think you will probably be rewarded mightily by our press. Let's see if that happens, that would be nice."

As for his relationship with Putin, Trump said in Wednesday's press conference, in a video clip captured by CNN, that he has "never spoken to him," and that he "doesn't know anything about him." But as the Huffington Post pointed out, Trump claimed in a November Republican debate that he "got to know him very well" since the pair were both on 60 Minutes. I think it's safe to say that questions surrounding Trump, Putin, and Russia will continue.