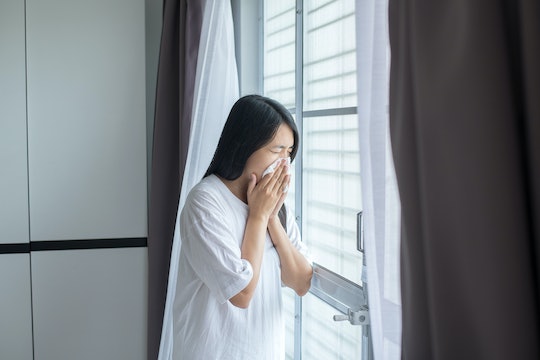 Here's How The Warmer Weather Can Impact This Year's Flu Season

Unless you’re in the Northeast right now — and if you are, I’m so sorry about the Nor’easter that’s hitting you right now (brrrrr) — springtime weather has been coming on slowly for at least a few days at this point. (Except in Atlanta, where we were wearing shorts on Saturday and now it’s 40 degrees.) But if you’re one of the lucky people who live in a place where there are actual seasons and a “normal” climate, you may be wondering how the season change affects sickness and germs. Like does warm weather kill the flu? Because as bad as the flu has been this year, you’re probably counting down the seconds until this horrible season is behind us, especially since the Centers for Disease Control and Prevention (CDC) reported that it’s the most widespread flu outbreak in years, hitting 49 states.

Well, there was a study conducted in October 2007 proving why the flu spreads faster in colder temperatures than it does in warmer temperatures, The New York Times reported. The researchers used guinea pigs and exposed them to the live flu virus. And of course, it spread, but by “varying air temperature and humidity in the guinea pigs’ quarters,” the flu spread rapidly and very well when the temperature was set at 41 degrees Fahrenheit. “It declined as the temperature rose until, by 86 degrees [Fahrenheit], the virus was not transmitted at all,” the article reported. So by a study conducted to understand how the flu thrives in colder temperatures, it answered the question of whether or not “warm weather” kills the flu. And it looks like it does. The article noted that at 41 degrees Fahrenheit, the guinea pigs “released the virus nearly two days longer … than at a typical room temperature of 68 degrees.”

Low humidity also affects whether or not the flu is as easily transmissible, and the study reported in the article showed that if there is low humidity, “the virus particles remain in the air” since, apparently, viruses tend to “float in the air in little respiratory droplets." Ew. Dr. Peter Palese, a flu researcher, told The New York Times, “When the air is humid, those droplets pick up water, grow larger and fall to the ground."

But Weather.com article reported that it doesn’t matter if it’s low humidity or high humidity, according to a CDC study. “High humidity was just as detrimental to small flu particles as large ones. That's important because small flu particles tend to hang in the air for a longer time, while large particles fall to the ground,” said study researcher John Noti of the CDC’s National Institute for Occupational Health in an interview with Weather.com.

However, a Romper article reported that a PLOS study found, “in sub-tropical and tropical climates, the flu virus spreads more throughout the year.” Wait. What? It actually makes sense. The article went on to report that researchers think it could be because people living in these climates spend more time inside their homes in glorious, glorious air conditioning, and “recycled air and close confines appear to play a role in spreading germs, according to the study.”

According to the CDC, “Most of the time, flu activity peaks between December and March and can last as late as May.” And with as horrible as this particular season has been, I think we can count on it lasting that long.

Maybe by May we won’t be going back and forth between shorts and heavy winter coats every other day, and the humid, hot weather will kill this virus once and for all — well at least this year. Boy, I never thought I’d be wishing for hot and humid weather. Until then, be sure to wash your hands in hot water as frequently as possible, clean all the surfaces in your home — even surfaces you may not even think about — every day, and cover your mouth and nose with your elbow when you cough and sneeze. It also wouldn’t hurt to eat more veggies, drink plenty of water, and get as much rest as you can. Maybe throw some elderberry syrup in there for good measure.