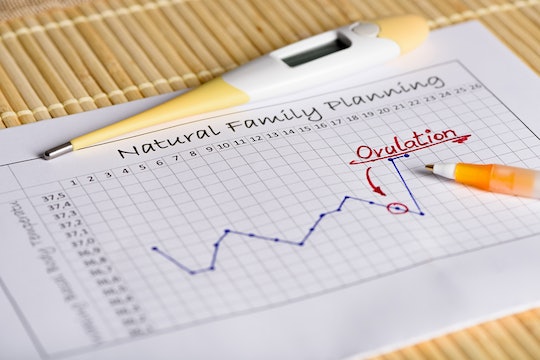 If You're Tracking Your BBT, Here's How Pregnancy Impacts It

When you’re trying to conceive (TTC), basal body temperature (BBT) becomes a term you’ll use daily when fertility tracking, because it’s important to know what your temperature is when planning sex. Right before you ovulate, your BBT is lower, like by a degree and a half, indicating you’re about to ovulate. When you’re actually ovulating, your temperature rises because of the release of progesterone, and that’s when you know it’s time to hit the sheets. But once you’ve successfully conceived, does your BBT stay high when you’re pregnant? Many watch the pattern of their temperature to determine if they're pregnant or not.

According to Dr. Sherry Ross, OB-GYN and Women’s Health Expert at Providence Saint John’s Health Center in Santa Monica, California, once you become pregnant, your BBT will continue to rise and stay high until the end of your first trimester, “as a result of the hormonal changes associated with pregnancy.” And even though BBT is primarily used to know when you’re ovulating, Ross says it’s not the most reliable. “BBT is not the most reliable way to track your ovulation since it is affected by unrelated variables such as the time of day, emotional and physical stress, illness, smoking, sleep disturbances, medication, travel, and alcohol use,” she explains in an email interview.

Dr. David Diaz, reproductive endocrinologist and fertility expert at MemorialCare Orange Coast Medical Center in Fountain Valley, California, agrees and explains further. “Normal core body temperature is 97.6 degrees Fahrenheit during the pre-ovulation (one to 12) days of the cycle, while estrogen is released from the ovarian follicle,” Diaz says. “After the LH surge causes release of the egg, the follicle collapses and production shifts to progesterone production primarily to prepare the uterus to receive the embryo one week after ovulation. The rise in blood progesterone levels cause a temperature shift in core body temperature by an increase of .5 to 1.5 degrees. This can be charted on a graph to demonstrate that presumptive ovulation has occurred. This level of progesterone remains elevated along with the temperature for about 12 days following ovulation.”

How high is too high, though? Is there a BBT that could be harmful to you or the baby when you’re pregnant? When should you seek medical attention? Ross says, “I am unaware that the BBT can raise to levels that are unsafe to the baby unless you have a temperature above 100.4 Fahrenheit during the first trimester caused by an infection. In general, if your body temperature is higher than 100.4 caused by a viral or bacterial infection, it’s important to take Tylenol to lower the temperature so the growing baby is not at risk for any structural abnormalities.”

Yes, your BBT can stay elevated throughout your pregnancy, but it should lower some after your first trimester. And after your period comes back, it will be completely back to your normal range. As long as it isn’t over 100 degrees Fahrenheit, it’s nothing you should worry about. And who knows, it could be a sign your fertility tracking worked and you're pregnant. If so, congrats to you.