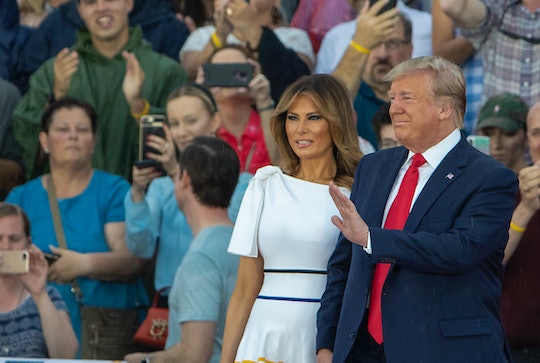 Last week, two mass shootings unfolded in the U.S. in less than 24 hours — in El Paso, Texas, and Dayton, Ohio. At least 31 people were killed, dozens more were injured, and many are still receiving treatment in hospitals. Among the innocent victims who were gunned down in an El Paso Walmart were a mother and father who died shielding their 2-month-old son. That baby lived because of his parents' sacrifice. Not even a week after the attack, Donald and Melania Trump posed with the baby orphaned by the El Paso shooting — and Twitter had some thoughts.

As Today reported, Jordan and Andre Anchondo — who had three children together — were shopping for school supplies for their 5-year-old daughter on Saturday, Aug. 3. They only had their 2-month-old son, Paul, with them at the time a shooter entered Walmart and opened fire. Tragically, both Jordan and Andrew died protecting their newborn, as Today reported, who survived the attack with two fractures and some bruises.

Fast-forward to Wednesday, Aug. 7, when President Donald Trump and First Lady Melania paid a visit to El Paso. As per The Guardian, the Trumps met with baby Paul at the hospital — where the infant had already been discharged. The baby's uncle, Tito Anchondo, is reportedly a Trump supporter, and so was Andre. Tito Anchondo “I think people are misconstruing President Trump’s ideas. My brother was very supportive of Trump," Tito told NPR.

All of this would have been acceptable — until Melania shared a photo on Thursday from their meeting with the Anchondos. It featured the FLOTUS holding baby Paul next to her husband, who was flashing a broad grin and giving a thumbs-up while standing next to Tito and another woman.

CNN has since confirmed that the baby in Melania's photo was indeed the orphaned child from the El Paso shooting.

Let's just say, the response on Twitter was swift — and people didn't hold back their feelings in the slightest. The Washington Post columnist Brian Klass tweeted, "This baby was recently orphaned by a terrorist who parroted some of Trump’s rhetoric. His parents died trying to shield him. I’ve don’t think I’ve ever met anyone who would think the appropriate response would be flashing a smile and thumbs up. Something is wrong with him."

Another Twitter user tagged the POTUS, FLOTUS, and other Republican politicians, writing, "If any of you think using an orphaned infant, and smiling, & giving a thumbs up in this situation is even remotely appropriate or humane, I hope there is a hell and you spend eternity there scrubbing toilets for non-Americans."

Yet another person commented, "So the sociopath Trump is here smiling and giving a thumbs-up while his wife holds a now parentless baby whose parents were mowed down in a shooting attack... inspired by Trump. This is insane."

Another Twitter user chimed in with, "The @FLOTUS and @POTUS do not seem to posses normal human emotions. It’s weird. I’ve never seen anything like it. Who in their right mind would think that beaming smiles and “thumbs up” would be right for that occasion?"

Let's pretend for a moment that Trump's racially-charged rhetoric, as detailed in USA Today, had zero influence on the most recent mass shootings. Why, just why, would someone holding/standing next to a baby who was recently orphaned by domestic terrorism think that smiling and giving a thumbs-up would be remotely acceptable? I mean, hug a relative for the photo op. Cradle the baby and look somberly at your spouse. Basically, do anything but stand there with a stupid grin and wildly unfitting hand gesture.

I just... I literally can't even with the level of inappropriateness on this one. And clearly, I'm not alone.