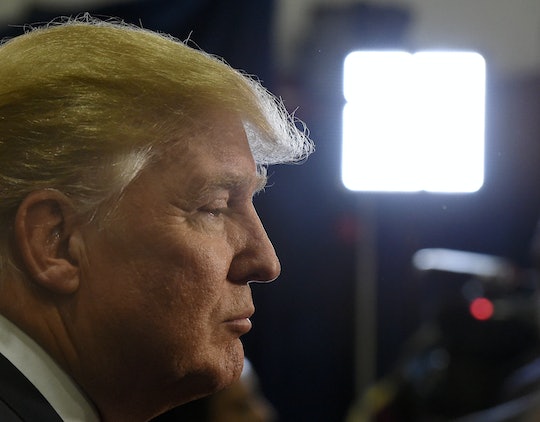 Remember when, in all his infinite wisdom, Donald Trump called for a travel ban on all Muslims from entering into the United States? If only that were just a headline of 2015 that would fade away forever... Not so, it seems. Here we are, just two days into the new year, and Trump's controversial anti-Muslim ideas to "make America great again" are here to haunt him in the form of a new Jihadist recruitment video featuring clips of Trump himself. Not like Trump was criticized by his fellow presidential candidates for his remarks. Not as if the even the Pentagon agreed that such anti-Muslim statements put the U.S. at risk, as Pentagon Press Secretary Peter Cook said on Dec. 8:

Without wading into politics, anything that tries to bolster the ISIL narrative that the United States is somehow at war with Islam is contrary to our values and contrary to our national security.

And even as Democratic presidential candidate Hillary Clinton called out Trump's anti-Muslim statements as terrorist propaganda fuel — statements she has since revised — still, Trump continued to double-down on his "ban all Muslims" rhetoric. Now lo and behold: a jihadist group associated with al-Shabab out of Somalia has used Trump's very same "ban all Muslims" comments in a 51-minute recruitment video. The relevant portion is below:

Trump's comments are flanked with footage of Anwar al-Awlaki, a U.S. citizen-turned al-Qaeda recruiter who was killed in Yemen in 2011 during an American drone strike. In the video, the late Jihadi terrorist urges African-Americans and Muslim-Americans to join their jihad against the U.S.

Which is pretty much exactly how U.S. Secretary of State John Kerry called it in a Dec. 13 interview on CBS's Face the Nation:

But I also think it's a very dangerous foreign policy, because it says to those in Islam who are trying to exploit people and recruit foreign fighters and otherwise, it says, look, look at America. Here they got a guy running for president who is waging war against Islam. Now, that's their impression. It's exploitable, whether he intended it or not. And it allows for recruitment. It allows for Americans to seem like it is indeed discriminatory against Islam, against Muslims. And it is highly discriminating against many Americans and others who are Muslim, and many people in the world who know that their religion has been hijacked and who want to recoup it.

As of this writing, Trump has yet to issue a statement from his campaign or his otherwise chatty Twitter account — an unusual and noticeable silence from someone who has had no problem speaking his mind.