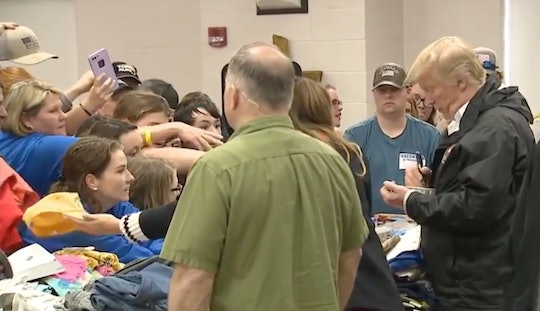 Another day, another ridiculous decision by our POTUS that makes everyone go, "Wait, what?!" Like serving fast food to football players at the White House. Or declaring a national emergency over the border wall when congress refused to provide funding for it. Or attempting to strip health clinics of Title X funding if they provide or refer patients for abortions. Now, Donald Trump signed Bibles for tornado victims — in yet another example of "WTF" behavior — and Twitter literally can't even.

As USA Today reported. President Donald Trump and First Lady Melania Trump paid a visit to Alabama on Friday, March 8 — nearly a week after devastated tornados ravaged the area and killed 23 people. The Trumps surveyed the damage, and met with families of victims and those affected by the storms during their trip. Providence Baptist Church in Opelika was one of their stops, where Trump thanked community volunteers in the church's auditorium. Oh, and where he happened to sign a bunch of Bibles, per the tornado victims' requests, according to The Washington Post.

Yep, you read that correctly. And if you're anything like me, then you're probably wondering, "Wait... is that even allowed?" Like, isn't that blasphemous? He didn't actually write it or anything. Hell, he doesn't even practice what's written in the Bible."

As you can imagine, plenty of Trump critics took issue with the Bible autographing — and Twitter pretty much erupted with outrage. One person tweeted, "At this moment trump is in Alabama signing bibles for people. He's literally signing bibles. I can't even with this."

Yet another Twitter user pointed out, "This is what’s frightening in the Church today. President Trump signing Bibles and fellow Christians believing this is okay. On top of this, I wonder how many in this picture invite Trump in their church, but wouldn’t do the same if an undocumented Immigrant came to their doors?"

Other Twitter users — while probably equally as horrified — responded with some on-point (and hilarious) burns. One particularly snarky Twitter user wrote, "In Trump’s defense, he wrote as much of the Bible as 'Art of The Deal.'"

Another Twitter user sarcastically wrote, "People don't understand the purpose of Trump signing bibles. Many people are without a way to prepare food after a disaster. When Trump signs a bible, it bursts into flame and people can cook over it."

Actor George Takei chimed in with, "Trump was signing bibles in Alabama yesterday. In related news, Dr. Hannibal Lecter will sign cookbooks in Florida next week."

Another person tweeted, "Autographing Bibles is not okay, is it? Maybe they think he wrote it. Hell, maybe HE thinks he wrote it." My thoughts, exactly.

So let's take a look at the whole Bible-signing issue, shall we? For Southern historian Wayne Flynt — a Baptist deacon and professor emeritus at Auburn University — it's a no go. “I’d never sign someone else’s Bible,” Flynt told AL.com. “That’s right next to sacrilege. That’s a holy book.”

Meanwhile, Robert Jeffress — a pastor of First Baptist Dallas and a prominent evangelical Trump supporter — seemed totally okay with it. He told The New York Times that it was "very appropriate" for the POTUS to sign Bibles, and that people ask him to do the same "all the time."

Full disclosure: I'm not even religious, and I'm offended on behalf of my Christian friends. So, sorry not sorry, but I'm going to go with a big, fat "nope" on this one. By all means, if you love the POTUS that much, have him sign something. Another book, perhaps — any other book — just not the Bible.

More Like This
Twitter Is Applauding Jennette McCurdy For Speaking Out About Toxic Mom In Memoir
Breonna Taylor's Mom Spoke Out About The Four Officers Arrested In Her Daughter’s Death
Georgia Says A Fetus Is A Dependent For Tax Returns At 6 Weeks
Dr. Jill Biden Just Delivered Some Frank, But Powerful, Advice On Motherhood