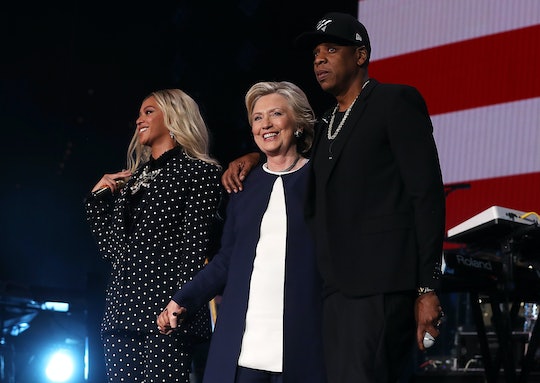 On Friday night, Hillary Clinton scored the jackpot in her quest for the White House: In Cleveland, musical power-couple Jay Z and Beyoncé were chief among the pop culture icons who performed a concert in support of the Democratic presidential nominee, a free event that doubled as an ingenious get out the vote effort in the crucial swing state of Ohio. What her opponent Republican Donald Trump got was more of the same: packed rallies teeming with his most fervent supporters and poll numbers that nevertheless lag behind Clinton's in several states just days before Election Day (Trump does lead by a small margin in a handful of smaller polls, including the USC Dornsife/L.A. Times "Daybreak" Poll). In yet another cagey, unsurprisingly agitated moment for the Republican candidate on Sunday, Trump slammed Jay Z for using bad language at the Clinton rally — succeeding only in exhibiting supreme hypocrisy and misunderstanding of the situation as a whole.

Perhaps it was hearing Jay Z introduce Clinton as "the next president of the United States," or the fact that the rapper referred to Trump as "this other guy" who "cannot be my president." More likely, it was the knowledge that such high-profile stumping is a major boon for the Clinton campaign. Either way, at a rally in Tampa, Florida, the next day, Trump went in on Jay Z for the language the rapper used on stage.

"I actually like Jay Z, but, you know, the language last night," Trump said, referring to the "f" and "n" words the entertainer used during his performance, according to The Washington Post. "Oh, oh. I was thinking, maybe I'll just try it. Should I use that language for one event? Can you imagine if I said that? So, he used every word in the book."

"He used language last night that was so bad, and then Hillary said 'I did not like Donald Trump's lewd language,'" Trump continued. "My lewd language. I'll tell you what. I've never said what he said in my life. But that shows you the phoniness of politicians and the phoniness of the whole system, folks."

Here's one of the problems with Trump's argument: Not only does Trump, in fact, have a long, rich history of spewing off expletives on the national stage, but he conflates Jay Z's "Dirt Off Your Shoulder" performance with the his own "lewd" language — a false equivalency that disregards context and the fact that one of these men is trying to become president of the United States, and the other is not.

Perhaps the most notorious example of Trump using "lewd" language is in the 2005 recording leaked last month that let the world hear him bragging and laughing about grabbing women "by the pussy." Of course, "pussy" used in that context is certainly classified as a bad word — but the word itself is not why the "Trump tape" is considered a turning point for the worse in his campaign. The sentiment conveyed in the chilling exchange with then-Access Hollywood host Billy Bush is that we have a GOP presidential candidate with a cavalier attitude toward women's bodily autonomy and sexual assault.

It goes much, much deeper than than profanity in a rap song — but Trump is too busy mocking the media's, his opponent's, and much of the country's reaction to hearing him use a vulgar, derogatory term to discuss making unwanted sexual advances on women. "I won't even use the initials, because I'll get in trouble," he said in describing Jay Z's performance lyrics, distorting the outrage over his own use of the word "pussy" to make it seem as though it's nit-picky, easily offended liberal correctness that censors all of us from speaking that way, bringing harmless "locker room talk" into the fore.

That's obviously not the case, but it's a convenient distraction for a man who could potentially lose the presidency to a woman on Nov. 8. And if that scenario comes, Donald Trump, in the words of the preeminent rapper Jay Z, "get that dirt off your shoulder" — and, in private, you can curse the outcome with all the swear words you want.