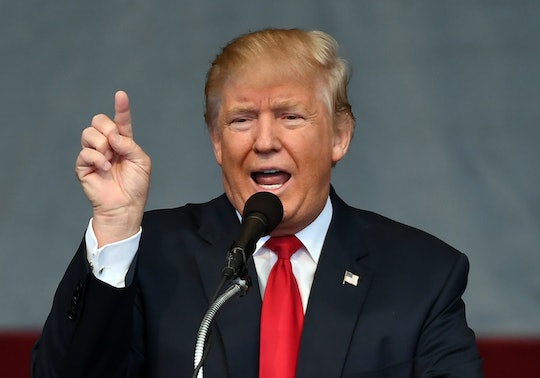 Donald Trump's Comments To Terminally Ill Patients Are Over The Line

Just when you thought it was safe to check your newsfeed... Donald Trump, GOP presidential candidate and master of the shock tactic, is at it again. As Trump prepares to match wits one more time with Democratic presidential candidate Hillary Clinton at the second presidential debate on Sunday, he's continuing his tireless campaign. (And what a campaign it is turning out to be.) Unfortunately, this time around, Trump's comments to terminally ill patients regarding the upcoming election are simply over the line — even for him.

At a rally in Nevada on Wednesday, Trump was looking to drum up some votes with probably one of the worst political pitches I have ever heard:

I don't care how sick you are. I don't care if you just came back from the doctor and he gave you the worst possible prognosis, meaning it's over. Doesn't matter. Hang out till Nov. 8. Get out and vote.

And just to soften the blow (or in case any of those whackos in the mainstream media decided to directly quote him, perhaps), Trump added:

I'm kidding. But I mean it.

But don't worry, he's not planning on simply taking their votes and running. He told the hypothetically ill people he would remember them fondly:

All we’re going to say is: "We love you and we will remember you always."

To be fair to Trump here, the pressure has got to be getting to him. He has another debate coming up with Clinton and this time the debate is going to be town hall-style. The audience will be asking half the questions, and those audience members are undecided voters. And then there will be Clinton, asking all of her pesky hard questions and getting all smarty pants-thinky on him, when all he was really hoping to do was shout and call her a crook to thunderous applause and chants of "Lock her up!"

Since the first debate with Clinton, Trump's polling numbers have dipped. Clinton is now at a relatively comfortable six point lead, according to the most recent polls, so it looks like Trump was taking a swing for the cheap seats. A low, thoughtless, crude, and insensitive swing that probably won't help him with those undecided voters. Particularly voters who have experienced the death of a loved one.

Of course, courting controversy has been Trump's calling card throughout his presidential campaign. Whether he's calling Mexicans "rapists", denigrating women, or referring to himself as a "genius" for tax evasion, he has treated the people to a roller coaster of emotions from day one.

This last comment though... nope. This could be the straw that breaks the camel's back.