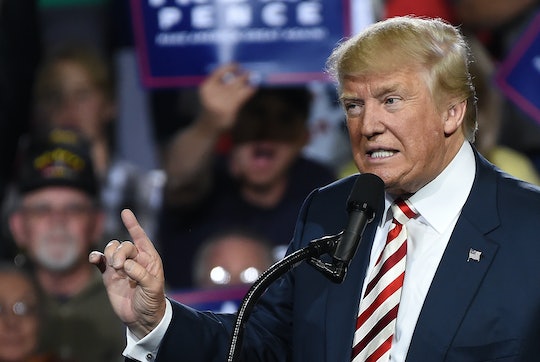 You don't need to be a victim of sexual assault to know the importance and necessity of consent. Still, the day after my sexual assault four years ago, I promised myself that if I had a child, and if that child was a son, I would teach him the importance of consent and bodily autonomy and safe sex. Now, as the mother of a 2-year-old boy, I'm realizing how potentially and painfully difficult it may be for me to teach my son that vital lesson. And in light of the comments he made about Arianne Zucker and Nancy O'Dell just days ago, Donald Trump's hot mic interview reveals how dangerous his presidency would be for parents, and how steep the road ahead could be if a man who speaks so casually about sexual assault is elected the president of the United States.

On October 7, leaked audio from a 2005 Access Hollywood interview revealed Trump describing a failed attempt to sleep with a married woman, making disturbing comments about other women, and noting that "being a star" means "you can do anything" to women, including, Trump said, "grab them by the p*ssy." Trump made the comments to then-host of Access Hollywood, Billy Bush for a segment meant to promote Trump's cameo on the daytime soap opera Days Of Our Lives. In the audio, Trump details, with a casual tone that is as infuriating as it is disturbing, his ability to do what he wants with women, because of his fame and wealth.

Said Trump in the video:

“And when you’re a star, they let you do it. You can do anything.”

And added, "I just start kissing them. It’s like a magnet. Just kiss. I don’t even wait.” Romper reached out to Trump for comment on the video and its release, but did not hear back at the time of publication. Trump released a statement apologizing for the statements he made in the video:

I’ve never said I’m a perfect person, nor pretended to be someone that I’m not. I’ve said and done things I regret, and the words released today on this more than a decade-old video are one of them. Anyone who knows me knows these words don’t reflect who I am.

However, in my mind, as a mother raising a son, and a sexual assault survivor still dealing with the lasting affects of sexual violence, the damage is done. In fact, it's salt on a wound that's been bleeding endlessly since Trump announced his presidency months ago.

I work tirelessly to teach my son about consent. Even though he's a toddler, I know I can instill vital lessons that will mold him into an individual who not only respects women, their bodies, their emotions and feelings, but I'll also insure that no one touches my son without his permission, too. I don't tell him he absolutely has to give me a hug or a kiss, nor do I allow it to hurt my feelings when I ask for a kiss goodnight and he refuses. I don't tell him he has to hug his father or his grandparents, because if he doesn't want to touch someone else, or want someone else to touch him, he doesn't have to. I tell him that under no circumstances is he allowed to touch someone else without their permission, even when he's trying to be friendly or has the sweetest intention for doing so. On the playground, when wanting to make friends and play with other children, I remind him that he cannot hug or kiss another "friend" without asking first. He needs to be mindful of personal space and comfortable with rejection. He needs to remember that he isn't "owed" affection just because he feels affectionate. He needs to be respectful and, at just 2 years old, he's already learning what Trump seems to dismiss so blatantly and casually.

The idea that this is just how men talk and "boys will be boys" is what I'm actively trying to unteach my son, yet I know how difficult that will be if the leader of our country — arguably the most powerful person in the world — sets the opposite example. How can I tell my son that he'll be held accountable for his actions when the president of the United States admits to grabbing and kissing women without their permission?

Which is why the latest instance of Trump saying derogatory, dangerous things about women is so upsetting. My work feels negated. My lessons feel somehow overshadowed by a man running for president who insists that talking candidly about sexually assaulting women is "locker room banter" and nothing more than a "private conversation" between two men. The idea that this is just how men talk and "boys will be boys" is what I'm actively trying to unteach my son, yet I know how difficult that will be if the leader of our country — arguably the most powerful person in the world — sets the opposite example. How can I tell my son that he'll be held accountable for his actions when the president of the United States admits to grabbing and kissing women without their permission, yet still holds such a prestigious, important place in society?

As a sexual assault survivor, I've often wondered why rape and sexual assault even exist. How does this happen? What provokes someone to dismiss someone else's humanity? I don't have answers but, now that I'm a mother, I'm inclined to search for them anyway. I believe that rape culture and failing to hold men accountable and talking about women as if they're nothing more than objects created for the pleasure of men is one of the reasons why a former co-worker felt entitled to my body, even when I shouted "No." While I do not and will not make excuses for my attacker's actions, in order to find a way to continue living, I've looked at our culture and listened to the messages our society seems hellbent on sending our sons. It's a message that convinces men they're entitled to women's bodies, and that they can do and say whatever they want to do and say to women, because they're simply men. I believe that the way we talk to men about rape supports the fact that one in five women victims of rape or attempted rape, one in every two women victims of sexual violence, and why an estimated 38,028,000 women will experience intimate partner violence in their lifetimes.

When we tell young boys (and girls) that hitting or pushing a little girl is proof that romantic feelings are at play, talking about women as if they're not human beings is inevitable. And when you believe you're owed a woman's time, affection, or body because of how powerful you are (or think you are), we're telling future generations that what a woman wants is worth ignoring and that what a woman deserves is worth ignoring.

My son will know the opposite to be true.

I was forced to have conversation with my 2 year old — someone so innocent, so young, and so blissfully unaware of our current political climate – all because a man running for office believes himself to be entitled to women's bodies. Now, imagine how often I'll have to do that if a man like Donald Trump becomes president.

Still, as I watched the news on Friday night and heard audio of Trump when he said, "Grab them by the p*ssy, " I sat in horror as my son started repeating the word he'd just heard on the TV over and over and over again. He doesn't know what the word "p*ssy" means. He doesn't know the context in which that word was used. He doesn't even know that a Republican presidential candidate said that word, or how, and why he said it. He's, thankfully, not old enough not to know what a Republican presidential nominee is. However, I found myself immediately compelled to sit down and explain (yet again) that we can't touch other people without their permission. I had to tell him that certain words, and actions, shouldn't be repeated or imitated, even if they're the words and actions of an "important adult" on television. I felt instantly angry I was forced to have conversation with my 2 year old — someone so innocent, so young, and so blissfully unaware of our current political climate – all because a man running for office believes himself to be entitled to women's bodies. Now, imagine how often I'll have to do that if a man like Donald Trump becomes president.

I'm already struggling to teach my son that consent is not only important, it's necessary. That struggle will only escalate if Donald Trump is elected president of the United States, and that should absolutely terrify parents raising sons and daughters. It terrifies me.