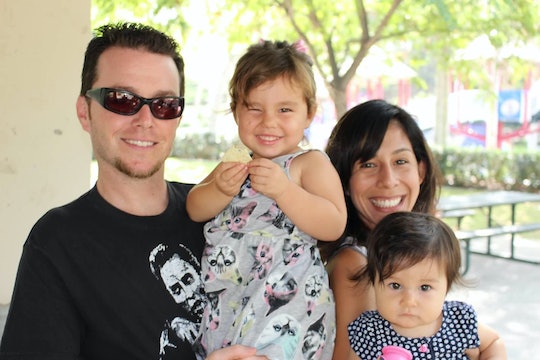 The first of three of the most highly anticipated presidential debates in American history did not disappoint, as presidential nominee Hillary Clinton and Republican presidential nominee Donald Trump took the stage at Hofstra University on Monday night and argued over achieving prosperity, securing America, and America’s direction. One candidate either provided the public with specific plans on she'd like to improve problems ailing the U.S., and the other pointed fingers at the people and institutions he believes are responsible for the majority of those aforementioned problems. Though the night was an overwhelming success for Clinton, Trump's "inner cities" comment is one I won't soon forget — namely because it speaks volumes about how he'd treat my family.

There were too many worrisome comments and off-the-cuff remarks made by The Donald to cover in this report. However, Trump’s remarks on Hispanics living in inner cities who are “living in hell” and “get shot” whenever they walk down the street highlight one of his biggest problems: he doesn't understand families who look like my own. And as for his plans to combat the problem? Well, don't even get me started.

Trump's “plans” to make communities safer for Hispanics and African Americans include the “stop and frisk” method practiced by New York’s police (which was eventually ruled unconstitutional by a federal judge in 2013). The hotel mogul possibly has other tactics to help improve the lives of minorities living in inner cities, but they remain to a mystery.

If Donald Trump is elected president, my male cousins, who are of no gang relation and who were born and raised in the USA, can expect to be stopped by the police for simply looking like “bad" or "scary" people.

Whereas Clinton provided intentions to propose a plan that would bring law enforcement, inner city communities, and faith institutions together to help restore trust between minorities and the police, Trump simply stated “law and order” needs to be implemented to improve race relations. “We have to stop the violence; we have to bring back law and order,” he said, adding that right now, police are afraid to do anything.

Trump’s comments provide some insight to how he’d treat my family. Although my mom relocated us from East Los Angeles to a safer city with higher school ratings and less crime, the majority of my family continues to reside in East L.A. which is predominately Hispanic. If Donald Trump is elected president, my male cousins, who are of no gang relation and who were born and raised in the USA, can expect to be stopped by the police for simply looking like a “bad" or "scary" people. Perhaps it'll be for the way they dress or for their haircuts; the thickness of their accents or the way they walk that will serve as cause enough for a routine stop.

My children are minorities simply because they are female and Hispanic. They are taught to be proud of their mixed identities — to embrace being American and Mexican. But a Trump presidency threatens to destroy that.

In effect, if implemented, my family would fall victim to a “policy of indirect racial profiling.” The policy’s mission to keep streets safe by removing guns from the streets and grants law enforcement the ability to stop anyone who appears to be a “bad person.” And that does not stop with Hispanic and African American men. My daughters will also have to be mindful of how their culture affects how they're perceived. Will my lighter-skinned daughter ever have to witness her sister, with her coffee-colored skin and black hair, stopped on her walk home from an afternoon movie simply because she “looks” Mexican or like someone who may be a "bad guy"? Should my cousins and nieces and nephews learn to drop their accent when in front of law enforcement?

What about my African American uncle who's lived in East L.A. for the majority of his life? Will my children have to watch an officer pull him over, make him get out of the car for questioning as he drives them to the panaderia simply because he's black?

My children are minorities simply because they are female and Hispanic. They are taught to be proud of their mixed identities — to embrace being American and Mexican. But a Trump presidency threatens to destroy that. I shudder to think of my daughters being forced to believe that the only identity that matters is being American. What will happen if my girls suspect the color of their skin and their Mexican descent to be a hindrance and possibility a liability? What will happen if they lose the very heart of what makes them who they are?

Perhaps Trump’s personal reality is one where placing judgment on a person based on the color of their skin, the inflection of their voice, and the way they look makes for a safer place to live. But that’s not the reality I want for my family.