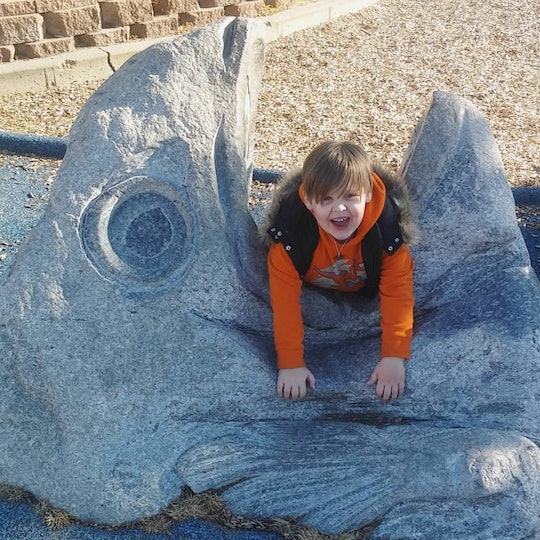 Donald Trump's Presidency Has Me Panicking For My Transgender Son

My son Arthur is transgender. I am also transgender, and he is being raised in a queer family. Many of our friends are LGBTQ people, so he is constantly surrounded by people like himself and his parents. To a degree, his way of life is normalized. But it’s also now under attack in a way that it wasn’t even a month ago, thanks to the incoming Trump/Pence administration.

As most of us know, Vice President-elect Mike Pence has some deeply awful stances on queer and trans people. On the website for his 2000 congressional campaign, the Vice President-elect endorsed conversion therapy, or the harmful practice of trying to "convert" LGBT teens, and in 2006, he stated that same-sex marriage would signal "societal collapse." More recently, Pence has said that both he and President-elect Trump believe that "the transgender bathroom issue can be resolved with common sense at the local level," which could mean that schools could have the right to bar transgender students from using the appropriate bathrooms.

As a queer and trans person myself, I'm horrified by the great uncertainty of a Trump/Pence presidency. But when push comes to shove, I can fight for myself. I can advocate for myself. That is how I survived to adulthood to create my wonderful family.

But Arthur is only five. He is still in kindergarten. He barely knows how hostile the world beyond our family can be. That's why, however frightened I might be of a Trump administration, I'm even more terrified for my son.

After the election, I tried to talk to Arthur to get a sense of how much he knew about what was going on. “You know how there’s a president?” I asked him.

“Now there’s a new one," I explained. "And this new one, and his vice president, they are not who I voted for.”

“Why didn’t you vote for them, Baba?”

“Because, kiddo, these guys don’t like people like us," I said. "They don’t like transgender people and queer people. Scary things could happen now that they have power.”

Arthur frowned. He looked as confused as I felt. Part of me didn’t want to tell him about the election, and part of me wondered if I really needed to: he was, after all, just five years old. But I knew he couldn’t really be shielded from it either.

"Kiddo, these guys don’t like people like us," I said. "They don’t like transgender people and queer people. Scary things could happen now that they have power.”

“Scary things could happen now that they have power? What does that mean?” he asked.

“I don’t know yet,” I said. “It might mean I have to fight people to keep our family together. But I will. And I’ll protect you, always.”

His eyes got big. “Don’t fight people! You might get hurt!”

“There’s a lot of different ways to fight, kiddo. Not always with fists," I explained.

In the weeks following the election, I've been trying to stick to my promise to Arthur to fight. I’ve set up standing donations to Planned Parenthood, and talked to him about why it's so important to give money to an organization that lets people decide what to do with their own bodies. I’m trying to get formal name change documents done for us by January, before the president-elect becomes the real live president. But the specters of Donald Trump and Mike Pence are still looming on the horizon.

I am constantly worried, for Arthur and for myself and for our family. I am worried that his school, which told us when he enrolled that he was their first transgender student, will start pushing him to use the girls' bathroom. I am worried he will be ostracized. I am worried he will be bullied. So far, his experience in kindergarten has gone wonderfully — but with the turning tide, it could easily go wrong.

I've sat and talked with Arthur about what to do if the school tries to get him to use the girls' bathroom and what he should do if he gets bullied. All of this is hard for him to process, because it means explaining that the world is scarier than he once thought it was.

"Why would they make me go to the girls' room?" he asked.

"Because the new president would say you are a girl, not a boy, because of the way your body is built."

"But that doesn't matter, right?"

"Why would they make me go to the girls' room?" he asked.

Will President-elect Trump influence what bathroom my child uses at school? At this point, we have no way of knowing. Trump is unpredictable, and prone to speaking out of both sides of his mouth. Back in April, he decried a North Carolina bill barring people from using public bathrooms that do not correspond to their biological sex, saying that transgender people should “use the bathroom they feel is appropriate.” More recently, however, he endorsed North Carolina's law, arguing that the state had the right to pass the legislation.

Arthur and I live in Colorado, which has something of a strange relationship with its transgender citizens. Colorado passes trans-friendly legislation fairly often: recently, for instance, the state passed legislation that made it possible to change one's gender on birth certificates without having surgery. Yet the state remains a hotbed of conservatism in many areas and a battleground for issues like school bathrooms, meaning that Arthur is growing up in a state that simultaneously embraces and rejects his identity.

My kid is growing up right in the thick of the war over transgender issues. With Trump as president, that battle might get even more intense. Yet we will keep fighting, because we have no other choice.