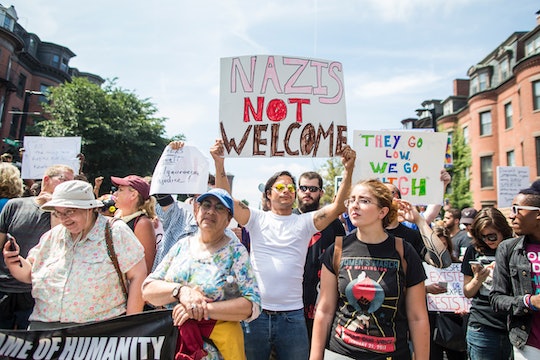 On Saturday morning, thousands of counter protestors flooded the streets of Boston in an attempt to stave off white supremacists and other far right, racist groups who were planning a "Free Speech" rally. The counter protest movement was so powerful, that barely any white supremacists actually showed up for their protest. Interestingly, Donald Trump's response to Boston's protests was very, very different from his response to the protests in Charlottesville, Virginia last week.

Well, kind of. At first, Trump tweeted, "Looks like many anti-police agitators in Boston. Police are looking tough and smart! Thank you." It did look like there was some confrontation between some of the protestors in Boston, but it was mostly peaceful. He shot off a few more tweets praising law enforcement and also Mayor Marty Walsh for being prepared. Then things got really weird.

The president tweeted just before 4 p.m. on Saturday, "Our great country has been divided for decades. Sometimes you need protest in order to heal, & we will heal, & be stronger than ever before!" Someone on his team must have advised him to be more specific so that Americans would know what kind of protest he was endorsing. So he added in another tweet that he applauded protestors standing up against "bigotry and hate."

It was a very different than message than last week.

Here Are All Of His Tweets On Boston

Trump was criticized last week for his response last week to the Charlottesville protests. At first, he seemed to side with the white supremacist groups and claimed that there were "many sides" to the issue. On Monday, he changed his tune a little bit and denounced hate groups, which many saw as a "too little too late" effort to save face.

But on Tuesday, he totally undid any good he might have done with his denunciations and blamed the counter protestors, saying that there was violence and good people on both sides, making a false equivalency between white supremacists, the Ku Klux Klan, Nazis and other hate groups and those protesting against those groups.

Knowing Trump, his praise for the groups protesting "hate and bigotry" might not last very long. Or, he could totally surprise Americans and vehemently denounce white supremacists, many of which are his supporters. (KKK leader David Duke thanked Trump for his response last week to the Virginia violence.)

Trump has a long history of insinuating that counter protests are all violent, as well as supporting many white supremacist beliefs— like that confederate statues are good "reminders," that police officers are always right, or that American needs to be made great "again," as if he were nostalgic for the country's violent, racist past.

Then again, maybe he has come around and seen that there aren't "many sides" to the argument about whether a certain race is superior or that another should be eradicated. That counter protests can be peaceful. Or that most Americans don't believe "free speech" means hate speech.

Who knows, maybe he'll surprise us this time. Stranger things have happened.