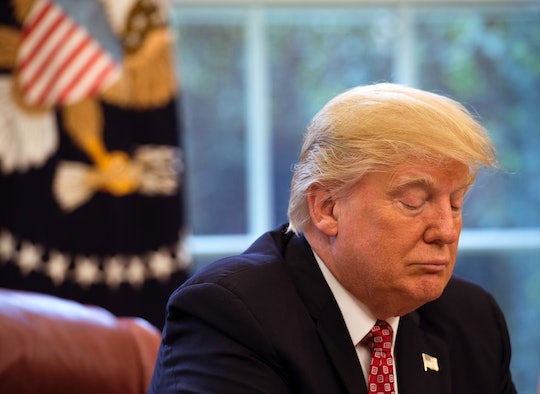 On Wednesday, President Donald Trump called House Majority Whip Steve Scalise everything from friend, to "patriot" and "fighter." His remarks came in the wake of a brazen mass shooting at an early morning baseball practice in Alexandria, Virginia, for an upcoming congressional charity baseball game. During the practice, Scalise was shot in the hip and four other people also sustained injuries, according to authorities. President Trump's response to the Alexandria shooting rang a bit hollow as he called for the nation's unity. If anything, Trump's words felt downright disingenuous. Speaking from the White House, Trump said:

We may have our differences, but we do well in times like these to remember that everyone who serves in our nation’s capital is here because, above all, they love our country. We are strongest when we are unified and when we work together for the common good.

If I had read this statement without hearing Trump actually say it, I would have sworn these were the words of some other member of the administration. Certainly these words couldn't have been spoken by the same man who has tried — and failed — to enact a Muslim travel ban, still plans to erect a 1,900 mile-long wall along the Mexican border, or called the mayor of London's response "pathetic" after a terrorist attack in his city.

Despite Trump's overt — if obligatory — motions of sympathy and support on Twitter in the wake of Wednesday's shooting, it is Trump's echoing silence around other acts of violence and intolerance that have arisen out of political and racial divisiveness since he was elected president. When he accepted the GOP nomination for president, Trump proclaimed himself as the "law and order" candidate. When Trump took office — as in literally standing on the inauguration stage — he warned of the "American carnage" ravaging our nation, crowing on about gangs and drugs like some kind of Chicken Little in Chief.

That's exactly what makes Trump's call for national unity on Wednesday sound downright laughable: He ran on a platform of fear-mongering and racial panic and then transforms into some figurehead of unity when a congressman gets shot. The Southern Poverty Law Center compiled nearly 2,000 reports of bias-related incidents in Trump's first month in office. We are now six months into his presidency and it's only after Wednesday morning's shooting that Trump says now is the time for our country to come together.

What of the unity between the president and the press, when Trump himself called the media "the enemy of the people" less than a month into his presidency? Where's the national unity in Trump congratulating Greg Gianforte on his Senate win in Montana, while saying nothing of the fact that Gianforte pleaded guilty to violently assaulting a reporter the night before the special election?

Where was the president's call for national unity after the Portland train stabbing over Memorial Day weekend that left two men dead, trying to defend a Muslim teenager and her friend from a deranged man shouting anti-Muslim slurs at them? Sure, Trump called the Portland stabbing "unacceptable" and offered those ever available "thoughts and prayers" for the victims — but he had nothing at all to say about the attacker's Islamaphobic motives. And even then, it took him two full days to finally say something at all after public outcry.

In his first speech to Congress in March, Trump called for unity in the wake of two Indian men shot and killed in a Kansas hate crime that occurred a month prior. In that same speech, Trump called for unity in the aftermath of numerous incidents of vandalism in Jewish cemeteries across the country — but not without first questioning the validity of those acts of anti-Semitism. In his congressional address Trump said, "We may be a nation divided on policies, we are a country that stands united in condemning hate and evil in all of its very ugly forms."

Trump's call for unity then wasn't one of collection action; it was far more passive. Trump says ours is a nation "united in condemning hate." Yes, President Trump — I think we can all agree that things like "hate and evil" are bad hombrés. And it's becoming clearer that "hate and evil" have likely played a role in the Alexandria shooting as well. But to toss out cheap pops calling for unity and the "common good" feels like a bad joke this far into his presidency, especially when Trump and his administration seem invested in anything but the common good or national unity.