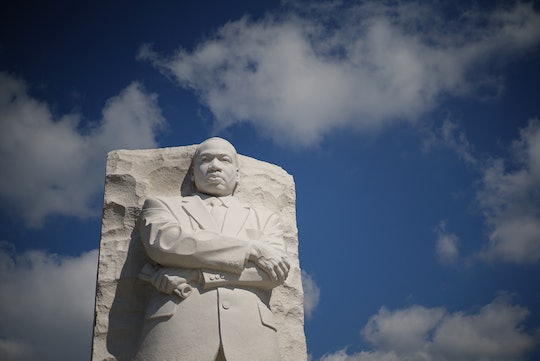 As the nation honors the birthday of its preeminent civil rights leader, the president-elect diverged from his favorite medium of communication, Twitter, to join in via Facebook. And that's not the only unusual thing about the post; in fact, Donald Trump's statement on Martin Luther King Jr. Day is a total departure from his previous comments on race. Because he spent the days leading up to this important American holiday attacking another icon of the civil rights era and frequent King collaborator, Rep. John Lewis, online, Trump's references to King as a "legend," "American hero," and "lasting inspiration" — all true characterizations — feel out of place with Trump's name attached to them.

Just days before the Facebook post commemorating King went live, Trump took to Twitter to slam Lewis — a Freedom Rider who helped organize the 1963 March on Washington and sustained a fractured skull at the "Bloody Sunday" march in Selma, Alabama, two years later — for saying during a televised interview that he does not view Trump as a legitimate president. Trump's calling the longtime congressman "all talk," and described the Atlanta he represents as "falling apart" and "crime infested" — comments more emblematic of the way Trump generally talks about African Americans and the communities in which they live.

The lack of respect he showed Lewis, who is considered one of the "Big Six" leaders of the civil rights era along with King, couldn't be more different than the way adoring tone of the MLK Day Facebook post.

"Our Declaration declares that 'all men are created equal,' and Dr. King challenged our nation to live out that sacred truth: to banish the evils of bigotry, segregation and oppression from the institutions of society and the hearts of men," Trump's statement reads in part. "His legacy of freedom is the true memorial to his life: no testimonial can pay better tribute than the faces of young children living out their dreams."

But during Trump's caustic presidential campaign, his detractors frequently accused him of addressing African Americans only as a guise to win white votes — of talking about black people rather than to them. This is perhaps most convincingly evidenced in his habit of attaching the article "the" in front of "African Americans" in speeches and debates, a possibly intentional tic that linguist Lynne Murphy of the University of Sussex described to Vox as "the key to 'othering.'"

"Our inner cities are a disaster. You get shot walking to the store," he said during the final presidential debate, for example. "They have no education, they have no jobs. I will do more for African Americans and Latinos than [opponent Hillary Clinton] can ever do in ten lifetimes. All she has done is talk to the African Americans and to the Latinos."

And the content of those comments rankle just as much as the constant insinuation that black Americans and other minorities aren't part of who we think of as "everyday Americans." Trump frequently depicts majority-black areas of the country as violence-ravaged, desolate wastelands where unemployed, uneducated, and desperately poor people languish — and he seems to operate under the assumption that all black people are confined to these horrors. In August, he appealed for the votes of African Americans by asking them "What do you have to lose?" Soon after, during a debate, he said, simply, that African Americans live in "hell."

Of course, this type of rhetoric was not absent from Trump's ode to King:

But [Dr. King's] work is not done: all around us today we see communities and schools falling behind and not sharing in the prosperity of American life. Each of us has a solemn obligation to ensure that no American is left behind — and that all Americans are fully included in the American Dream. When young Americans of color are left on the sidelines, our nation is denied a lifetime of contributions to this society — and when any of our American brothers and sisters is forced to live in fear, or poverty, or violence, it is setback for the entire nation.

As The New York Times reported over the summer, pre-election, many black Americans do not see their realities reflected in Trump's dystopian view of the black experience. "It’s an inaccurate portrayal of the community that seeks to define the community by only its biggest challenges," National Urban League president Marc Morial told the newspaper. "Black America has deep problems — deep economic problems — but black America also has a large community of striving, successful, hard-working people: college educated, in the work force."

Trump's adulation of King is also striking considering his general racism: He frequently practiced housing discrimination against African Americans as a real estate developer (Trump's team has not responded to Romper's request for comment regarding the housing allegations); for years he fanned the lie that the country's first black president was not born here; he nominated noted racist Jeff Sessions for attorney general.

Twenty-six percent of African Americans live in poverty, the Times reported, while 15 percent of the general population does. Still, that means that the majority of them aren't in the dire situation in which Trump believes them to be, and they are not political pawns or pitiable prisms through whom to gain white support. So, while the president-elect meets with Dr. Martin Luther King Jr.'s son Monday, he would do well to remember that this demographic is not a monolith, and that black Americans are just as much Americans as anybody else in this country.