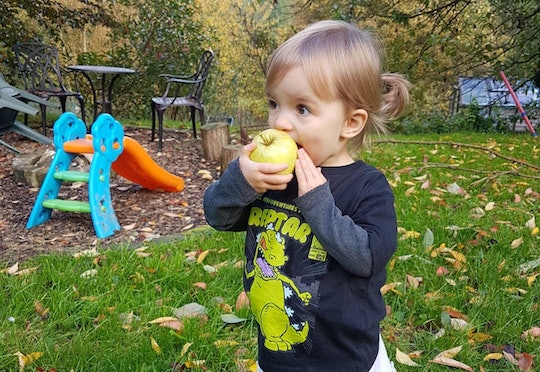 Don't Comment On My Kids' Bodies This Summer, Or, You Know, Ever

As we approach the summer holidays, a time of year during which the cultural narrative of aspirational weight loss is arguably at an all-time high, I'm reminded to ask those around me not to comment on my children's bodies. It's a preference I have all 12 months of the year, to be honest. Still, as so much of the world simultaneously prepares for beach trips and outdoor adventures, the emphasis on our bodies tends to peak, and not even children are safe from the ambush.

When I look back to my own childhood, for instance, I cannot really remember a time when I was not fixated on losing weight. I know that this time existed. I have seen photos of myself at ages 3, 4, maybe even 5. I have seen the smiles on my face and the effortlessness with which I seemed to carry myself. I can't remember the feeling, though.

It was around 6 that I became truly aware of my body, or at least of the space it occupied. People around me had been making comments about my figure long before then, and by 6, their impact, combined with the messaging I was receiving from media, peers, or teachers, began to wear on me. I started making connections between my chubby body and the bullying I faced, or my chubby body and the discomfort on a relative's visage, or my chubby body and my doctor's concern. A few years later, I went on my first diet. A few years after that, I was enrolled in a Jazzercise weight loss program. A few years after that, I had developed a restrictive eating disorder.

When I think of my own daughters and the childhood memories they may hold onto, I so desperately want to ensure that they cannot say the same. If I could, I'd keep the feeling of being at ease in their bodies safely within them through their lifetimes. Unfortunately, my husband and I know that there is no escaping commentary on bodies, on beauty, on worth, or on weight, health, and the assumed correlations between them in our current cultural climate. All we can do is our best to keep beauty-standard talk out of the household, and to implore our loved ones to help us.

My daughters Luna and Elia are only 2 years old and 11 months old, respectively. To some, it may seem too early to worry about the consequences of the body talk that may go on around them, or the body-related comments they themselves receive. In an age when even kids TV is still full of anti-fat bias and body-related remarks, though, I don't think it's ever too early.

In 2015, an extensive report by Common Sense Media, which analyzed decades of research into body image, revealed that 80 percent of 10-year-old girls have been on a diet. Furthermore, more than half of girls and a third of boys ages 6 to 8 want thinner figures. Kids as young as 5 have showed concern with their bodies' appearance, and five to 8-year-olds who feel their mothers are unhappy with their bodies are more likely to be unhappy with their own.

The weight loss industry and its accompanying media often target susceptible, vulnerable, underage kids, and either overtly or subtly tell them that they are in need of an aesthetic transformation. Earlier in 2018, multi-billion dollar corporation Weight Watchers offered free membership to teenagers ages 13 to 17. There were some caveats, to be sure. Teens must be accompanied by a parent or guardian, their target weight must be set by a doctor, and they must be in the 95th percentile for their age and weight. The message was simple, though. If you're fat, you need to be "fixed." Other weight loss enterprises allow kids into their realms, too. You can be 14 and join Nutrisystem.

It is not uncommon for body image concerns to quickly metamorphose into disordered eating, something that is a lifelong struggle for many. According to Eating Disorders Victoria, a support and information service for all varieties of ED, "It is most common for eating disorders to develop during adolescence, [but] young children can also be affected. Both the Royal Children's Hospital in Melbourne and the Westmead Hospital in Sydney have recorded large increases in admissions in children under 12 since 2000."

As Adolescent Growth, a mental health treatment facility for teens, reported, 5.4 percent of children between the ages of 13 and 18 in the U.S. alone will suffer from anorexia, bulimia, or binge eating disorder, amounting to more than 2.2. million teens.

My kids are only little, but already my oldest absorbs everything she hears. The last thing I want her absorbing is the notion that there is something wrong with the way she or her sister or any person looks. In truth, people already comment on both of their bodies', though. Luna is "the skinny one." Elia is "the chunky one." The former "takes after her dad;" the latter "takes after her mom."

Some folks already imply that Luna is somehow superior to her sister on the basis of thinness — an idea I certainly do not want either of them digesting as they grow. Others interrogate Luna's diet, wondering whether she is "too small." In contrast, I have been advised to limit my 11-month-old's diet (which primarily consists of breast milk and purees), lest I want her to continue to be fat. I was once told she would become envious of her sister, if they continue to be dissimilar in shape. I have been asked whether I'm intentionally making Elia bigger, as though my beliefs in fat acceptance mean I am actively seeking to manipulate a baby's weight. Their bodies, which will undoubtedly change countless times before they are grown individuals, are taken as appropriate subject matter, when in reality, they are anything but.

So as we approach summer, a time during which more extended family is present in my kids' lives, I'm going to be asking for a reduction of the body comments, particularly those that suggest the importance of size or shape. I am happy for people to tell my children that they are beautiful; I think they are, too. Ideally, though, I also want them to tell them they are funny. I want them to tell Luna she is smart, or brave, or full of spirit. I hope they tell Elia how happy she seems, how strong she already is, or how sweet her disposition appears regardless of how young she still is.

Thinking back to my own childhood, I cannot remember there ever being a reasonable, helpful, or otherwise good reason for someone's remarks on my body. The words were only ever said to poke fun, or throw shade, or raise faux "concern," or to blatantly try to teach me that striving towards thinness and beauty (as defined by a very narrow construct of the word) was a valuable pursuit. Especially for women.

I have never found it valuable, though. I have found it harmful, and I do not wish the same harm onto my girls. Instead, I wish them peace, and contentment, and satisfaction, and enjoyment. I wish them freedom of expression and a not-too-harrowing road to self-fulfilment. I wish that they find the outlets they need to feel like their most authentic selves, without hating the shell that's going to carry them through it all.