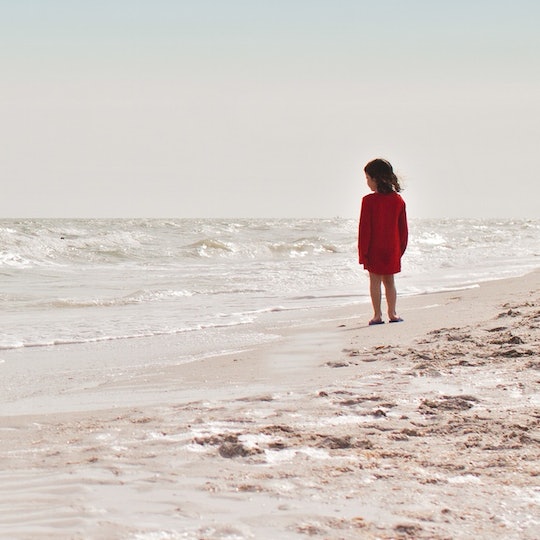 It might seem like the most far off thing to imagine, as you watch your school-aged kid run around the park or concentrate on destroying a new level in their video game (I mean, super educational iPad app), but believe it or not, even if they're still young, there might already be plenty of signs your child has low self-esteem, or is already developing body image issues. Yes, even if you still consider them too young to even be aware that the term "body image" is a thing (which, to be fair, they might be), that doesn't mean they are exempt from this issue that seems to be creeping up on kids earlier and earlier.

Thanks to the big, bad, beautiful Internet, how the media affects self-esteem is an even more important factor for them than for us as adults. Kids get to see the Kardashian clan embrace plastic surgery like it's going out of style (isn't it, though?), and get to witness magazine covers telling them how disgusting the celebrities are who have gained weight and all of the "totally easy tricks" to have a "perfect body." You don't have to be a teenager to read between the lines and deduce that if a perfect body looks like that, and your body doesn't look like that, then your body is bad and wrong. It's a simple (yet, as we know, painfully effective) message. Basically, kids are getting it at every angle from a very young age, and as a result, your kid might be developing body image issues already.

But the problems with body image issues in the media go beyond some TV shows and magazine covers for kids. As we're well aware, kids are undiscerning sponges. They soak up (and keep) everything they see and hear. And thanks to them being kids, the good, the bad, and the outright bullsh*t all gets jumbled around in side of them in huge messes of misinformation and unhealthy ideas. This can so easily result in kids developing body images early on, starting them on what could be dangerous roads of self-loathing, real self-esteem problems, and even horrible things like disordered eating and self-harm.

The good news is, the earlier you catch these problems, the easier they are to fix. If you can pinpoint the signs yourself, maybe you can nip this dilemma in the bud for your kid and/or get them outside, professional help and guidance. If nothing else, it's at least worth keeping an eye on.