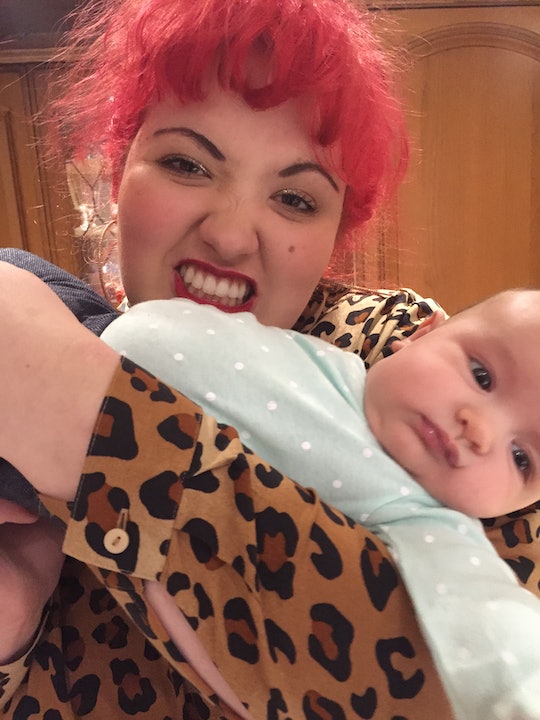 The first time I left my baby at home with her grandparents, she was two weeks old. My partner and I had spent those 14 days in a state of sleepless anxiety. We were beginning to feel isolated from the world and disconnected from each other. So we went out for dinner. Then we went to see Trainspotting 2.

The next time I left my baby at home was for the whole night, when she was just under two months old. She stayed with her father while I caught up with friends in the city for a night of drinking and dancing. It was the kind of night that I had quite often during my early 20s. It was also the kind of night I'd been taught to believe I could never have again once I was a mom.

On both occasions, I suffered from a tremendous amount of self-doubt. Should I be doing this?, I wondered. Would the baby be OK? Could anyone ever care for my daughter as diligently and lovingly as I cared for her?

This self-doubt was fueled by the fact that people seemed to be judging me for leaving my child with a sitter. "I can't believe you left your baby so soon," one acquaintance said, proudly adding that she didn't leave her son with another person for 16 months. "Wow, you're so brave," another friend said, in a tone that wasn't at all complimentary. "I wouldn't trust anyone with my infant," a family member told me.

But to all the folks who criticize me for leaving my kid with a sitter, I just want to say this: A person doesn't stop being a person when they have a kid. I need alone time just as much as anyone else, so keep your opinions to yourself.

When you become a mom, your body goes through all sorts of physical changes and sharp drops in hormones. You're sleep-deprived and overwhelmed, and on top of all that, you have to deal with people joking that your life is "over," or that you better get used to spending every waking hour with your kid for the next 18 months.

Spending time away from my daughter isn't selfish: It's essential.

There's an expectation that becoming a mother means giving up any semblance of your own identity. This kind of self-sacrifice often involves completely eschewing your social life, your job, your sense of style, and your hobbies, all in favor of dedicating 24 hours to your kid, seven days a week.

What we should perhaps be doing instead is teaching mothers how to balance their lives and identities with their new duties as parents. This, I believe, serves not only the moms, but their children. Children who will subsequently grow up with wildly interesting, talented, independent, strong mothers who know how to juggle all that life has to offer.

I almost never leave my daughter alone. As a breastfeeding mom, her survival is sort of dependent on her close proximity to my body. I try to pump when I can, but I rarely manage to get enough milk out to leave her with someone else for more than a couple of hours. Luckily, because I work from home, I don't really have to leave the house most of the time. Instead, babysitters come to us. They help me mind my daughter while I do my work, or take 10 minutes for a shower.

Any time spent away from one's baby is considered selfish, inconsiderate, or downright irresponsible.

I can count the amount of times I've gone out by myself to see friends, buy groceries, or partake in a night out, on two hands. That makes for less than 10 full moments to myself in almost 150 days.

To some folks, however, it doesn't matter how much time I spend with my baby on a daily basis. Any time spent away from one's baby is deemed selfish, inconsiderate, or downright irresponsible. Any time spent away from my baby is considered a waste, as if I'm not taking advantage of what so many parents deem "the wonder years" of childhood, before your kid is in school or too preoccupied with their own friends to pay any attention to mom.

In truth, the moments I've had to myself — to be with friends, to catch a movie, to do some shopping — have only made me value the moments I have with my daughter more. In those moments, I can most acutely remember what it is that I like about myself, along with what it is that I like doing outside of being a mom. It's in those moments that I recognize the importance of having close female friends, or the joys of getting dolled up and dancing like no one's watching.

Spending time away from my daughter isn't selfish: It's essential. It's how I recover from days upon days spent inside, changing diapers, sleeping very little. It's how I reenergize, so I'm ready for whatever new challenges I might face during the day. It's how I hang onto what I feel is a more progressive, inclusive interpretation of motherhood, which allows room for self-love and self-care and self-preservation.

It's also how I remember that leaving your child with a babysitter isn't a matter of choice for a lot of moms. While I personally have the luxury of working from home, a lot of mothers do not. A lot of mothers work outside the home, to ensure they can provide both the financial and emotional support they need to raise a child.

When these mothers go to work and leave their children at daycare or with a babysitter, they are not being selfish. They are not irresponsible. The same goes for the mothers who could be with their kids 24/7, but who choose to make time for themselves on occasion. They aren't selfish, either. They're just people, who have needs and wants and desires that have nothing to do with being a mom. Because your identity doesn't disappear when you become a parent, no matter how many people might try to convince you otherwise.

I'll continue to use a babysitter from time to time. Sometimes it'll be a relative, and sometimes it won't. It'll be my way of remembering that the version of myself I want my daughter to grow up knowing is the one who can teach her about literature and journalism and museums and partying responsibly and fashion. It'll be the version of myself that actually makes time for myself, and as a result, I know I'll be a better mother.