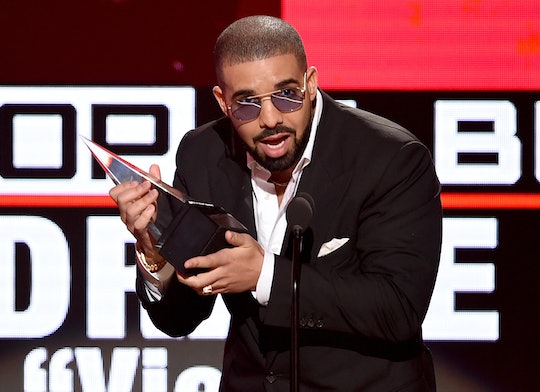 Sometimes comedy is the best medicine for a wounded soul. Case in point? Drake's Taylor Swift "Bad Blood" parody at the AMAs this Sunday. American Music Award host Jay Pharoah showed a clip of the Apple commercial with Taylor Swift eating it on a treadmill, since she's too busy singing Drake's "Jumpman." Everyone laughs, because everyone always laughs at Taylor Swift, but then the hosts let a parody video play.

The parody video shows Drake working out and then getting really, really into "Bad Blood," by Talor Swift, showing that the feeling is mutual when it comes to silly work out jams. It also shows that even Drake can't handle working out while singing along to his favorite jam. The parody video starts with Drake in a gym and then slowly but surely beginning to rock out to "Bad Blood." And just like it was for Taylor, things don't end well for Drizzy as he jams to Swift.

It's adorable, in terms of awards show sketches. It's cute, funny, and timely, which is what award show sketches and performances should be all about. The Drake parody is especially good because Drake and Swift have been rumored to be hanging out with each other recently, according to USA Today. That means that some gossip sites assume they're dating, but let's be real: they probably most definitely aren't.

Either way, Drake does have a good way with words when he's making fun of himself. And there is no way to compare the two. Drake's parody of Swift's ad is funny, but it could be read as a tougher critique of the pop star and pop culture as a whole. According to Esquire, Swift was taken to task for not saying certain words in the "Jumpman" spot, but picking on what Drake parodies in his "Bad Blood" video doesn't even seem like something that will be done. He's just making fun of girls, right?

It's funny that Drake tried to parody Swift rapping to "Jumpman" and falling flat on her face. Drake will go down as being very funny in his parody, but what he's parodying isn't even all that funny.

In the original ad, Taylor Swift had to face plant on a treadmill for everyone to laugh. Even if you don't like Taylor Swift, a girl having to fall on her face to get a laugh is not a very good laugh. That commercial is kind of hard to watch. So yes, was the Drake parody of it funny? Maybe. But why is laughing at Taylor Swift eating it on the treadmill funny at all?