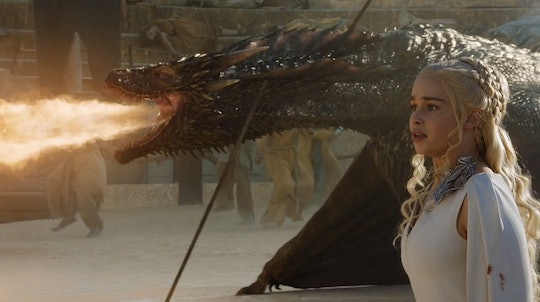 Remember when things were simple for Daenerys Targaryen and all she had to do was rule Meereen with a BFF by her side and an army of Unsullied backing her up? Then, things got complicated (as they so often do when one is the Mother of Dragons). Now she finds herself leading a khalasar. But what does Drogon's return to Game of Thrones mean for the khaleesi and her quest to take the Iron Throne? Daenerys is nothing if not a great speech giver and when she spoke to the army of Dothraki at the end of Sunday's episode of Game of Thrones, she gave them exactly what they needed to hear. Of course it helped that she had Drogon flying overhead while she spoke to them, but it's just as well.

The important thing about Drogon's return to Game of Thrones, though, is not only that he is now here to back up Dany, since he's kind of the best cheerleader you can have. But also that his presence cemented Dany's hold as the leader of the biggest khalasar viewers have ever seen on Game of Thrones. This is also the first time in a long time that we finally heard Daenerys talk about taking the throne back again. Until now, she seemed to have been happy leading the resistant people of Meereen and being generally unexciting.

Now, Daenerys Targaryen Stormborn, etc. (whose name will just continue to grow from here on out, no doubt) is after the throne once again and all about that inspirational quote life. Which you kind of have to be if you're going to lead an army of thousands to Westeros and take over the throne from the kind of untouchable Lannisters. The famed Walk of Shame not withstanding.

After asking Daario about how many ships she'll need to get to Westeros with both her khalasar and unsullied armies and showing a real interest in the whole reason for her being such a big player on Game of Thrones, Daenerys then saw the return of Drogon and really riled up her crew, basically letting them know how she intends to get things done with a dragon by her side and thousands of soldiers behind her.

Of course anyone can talk a big game while chilling on top of a huge dragon, but still, you've got to get some sort of excitement of Drogon's return on Game of Thrones and what it means for her armies backing her completely.