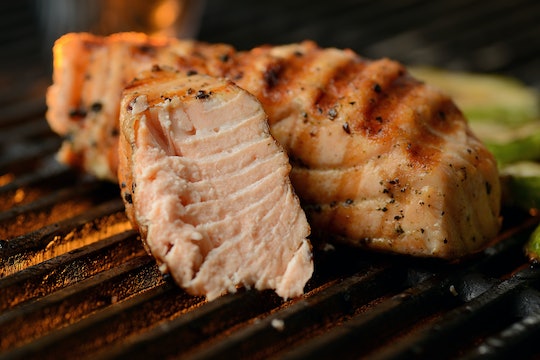 Ask someone to think of a sexy food and they're probably not going to immediately say fish. But, according to new research, eating fish increases sexual desire and pregnancy in humans. In other words, step aside romantic stakeholders like strawberries and chocolate - a new champ has come into town.

A new study in the Journal of Clinical Endocrinology & Metabolism surveyed 501 couples from Texas and Michigan between 2005 to 2009. Researchers set out with the objective of examining "the relationship of male and female seafood intake with time to pregnancy".

The researchers did have some guidelines in place about the couple's eligibility. As the study outlined, the women involved were required to be aged 18 to 44 years and to have had no hormonal birth control injections during the previous year. Men were required to be older than 18 years old. In addition, the study excluded couples if they had not been using contraception for more than two months.

Now, you're probably wondering: what even made researchers look at this?

Well, it all goes back to omega-3 fatty acid. According to the context provided by the study,

"Marine long-chain omega-3 fatty acids have been positively related to markers of fecundity in both men and women. However, seafood, their primary food source, can also be a source of toxicants, which could counteract the reproductive benefits."

The health benefits of omega-3s vary widely. A recent study found omega-3 supplements may improve kids' behavior and, in general, are crucial for a healthy diet. Another study found that omega-3s reduce the risk of pre-term birth.

However, as researchers noted in the study, in the context of fertility, "seafood has largely been studied as a potential harm, representing a primary source of exposure to reproductive toxicants such as organochlorines, dioxins, and mercury."

For the average adult in the United States, it is recommended to eat at least two servings of sea food per week. In January 2017, the US Food and Drug Administration and Environmental Protection Agency suggested women who are pregnant or might become pregnant eat no more than three servings per week. It was a guideline established to limit fetal methyl-mercury exposure, but according to researchers, "these guidelines did not consider the potential reproductive benefits of seafood intake."

It's similar to the study of omega-3s in the role of reducing the risk of pre-term birth. Typically, women are told to completely avoid fish throughout pregnancy, but new research is revealing that's far too simplistic.

Omega-3 fatty acids can be broken down into three main types, according to the National Institute of Health: alpha-linolenic acid (ALA), eicosapentaenoic acid (EPA), and docosahexaenoic acid (DHA). The National Institute of Health goes on to say, "ALA is found mainly in plant oils such as flaxseed, soybean, and canola oils. DHA and EPA are found in fish and other seafood."

Your body can't create omega-3 on its own, so the only options are to consume it directly or take supplements, as noted by the National Institute of Health. In the study, researchers obviously focused on direct consumption and didn't discriminate about the type of seafood couples ate. Whether it was canned tuna or shrimp, it all counted.

It might be weird to think of fish as a sexy food and maybe that cultural shift will never really happen, but this study still helps to reveal the benefits of adding seafood to your diet. Hopefully, those benefits will become common knowledge.

More Like This
Can Elderberry Help Prevent Illness In Kids? Doctors Weigh In
Cold Medicines For Kids: Safety, Risks & Best Alternatives
Endometriosis & Your Sex Life
How To Get Boogers Out Of A Baby's Nose