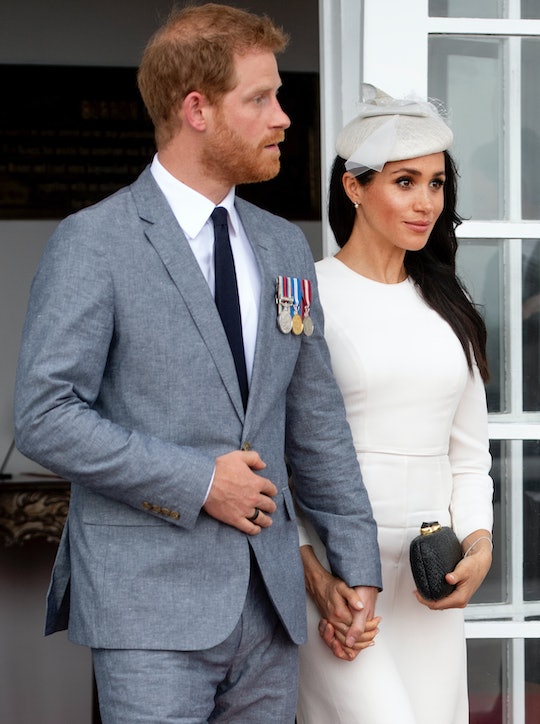 Quickly after news broke that the Duke and Duchess of Sussex took an end-of-summer holiday in France with their 3-month-old son Archie, friends of the royal couple such as Elton John and Ellen DeGeneres have defended Meghan Markle and Prince Harry after they got "attacked" by the media and people on social media for traveling on a private jet. Markle and Prince Harry undoubtedly have thick skin for relentless criticism at this point, but it seems that friends of the couple felt the backlash had gotten so hostile that they simply had to speak up and set the record straight about their character.

The backlash really amped up when Prince Harry, Markle, and baby Archie enjoyed a family vacation in the south of France, as The Sun first reported. Sounds innocent and lovely, enough, right? Especially for a couple who have set an ambitious agenda for their new foundation of highlighting conservation and preservation of the natural world, starting with an upcoming tour of Southern Africa for which a bit of advance R&R seems totally appropriate.

But when it came out that the couple's means of getting to Nice — the gorgeous coastal city in France — all heck broke loose, with critics claiming that "gas guzzling" private flights, as the Daily Mail described it in a headline, is incompatible with the couple's interest in fighting climate change, as People noted.

With the noise only growing louder, famous friends of the royal duo decided to weigh in, starting with Elton John, the late Princess Diana's close friend and the Sussex clan's host in France, as he shared on Instagram.

"I am deeply distressed by today’s distorted and malicious account in the press surrounding the Duke and Duchess of Sussex’s private stay at my home in Nice last week," John wrote in a post on Instagram on Monday. "I feel a profound sense of obligation to protect Harry and his family from the unnecessary press intrusion that contributed to Diana’s untimely death."

His post continued that after Markle and Prince Harry's "hectic year continuing their hard work and dedication to charity," he and his husband, David Furnish, wanted them to "have a private holiday inside the safety and tranquility of our home." John confirmed the couple traveled via private jet, but noted that it was necessary for their safety. "To maintain a high level of much-needed protection, we provided them with a private jet flight," he wrote on Instagram adding that "to support Prince Harry’s commitment to the environment, we ensured their flight was carbon neutral."

"I highly respect and applaud both Harry and Meghan’s commitment to charity and I’m calling on the press to cease these relentless and untrue assassinations on their character that are spuriously crafted on an almost daily basis," John concluded his post.

Although fans were supportive of John's defense, many still opined the use of such a jet was not in keeping with Prince Harry's strong stance on the environment, and further that since the royal family is supported in some ways by U.K. taxpayers, critique wasn't totally unwarranted.

This, however, provoked Ellen DeGeneres to enter the fray, as TMZ reported. The talk-show host tweeted that she and wife Portia DeRossi met the royal couple, who "were the most down-to-earth, compassionate people. Imagine being attacked for everything you do, when all you’re trying to do is make the world better."

Meanwhile, polo player, charity figure, and friend of the couple, Nacho Figueras also chimed in to defend the Markle and Prince Harry. According to a screenshot of a comment Figueras left on John's Instagram post shared by royal reporter Omid Scobie on Twitter, Figueras said the "press focuses on attacking them and trying to find problems where there are not."

Figueras also called them "great human beings" and said he "will defend them and what they do and who they are for as long as I live."

It's hard to imagine living in a world with so many eyes on you all the time, like it is for the Sussex family. As John noted on Instagram, it's highly unlikely that Markle and Prince Harry, along with their infant son Archie, could have flown safely and with privacy on a commercial flight. However, given that Prince Harry has been outspoken as far as the need to take personal responsibility for environmental destruction, it's not surprising that some are concerned about them flying on a private jet.

At the end of the day, though, if there is anything to be learned from all of this, it seems that attacks from the press like this don't seem to create anything but more negativity in a world that's already divisive.