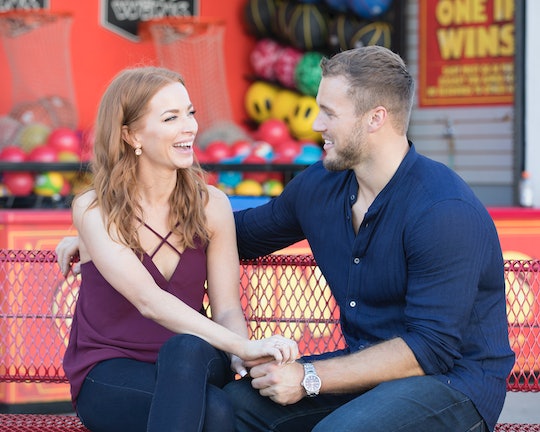 Ever since she fully embraced being one of the "older" Bachelor contestants this season, viewers have supported Elyse on her journey with Colton. She's 31, by the way, so eye roll. Since she was given one of a handful of single dates so far this season, there was obviously something special about her. So when Elyse eliminated herself on The Bachelor, it was a little heartbreaking.

Her concerns came early on in Monday's episode. She confided to Kirpa that because it had been weeks since her one-on-one date with Colton, her worries were almost worse than if she hadn't had one at all. She explained that she was second guessing everything at this point and almost constantly wondering if she and Colton were on the same page.

She then wondered out loud if being chosen for a group date meant that she and Colton did share the same feelings for each other or if it meant that he needed to get to know her better outside of a one-on-one date. Elyse was kind of in her head, which you can't blame her for, but in the end, she realized that she needed to leave The Bachelor on her own.

Elyse admitted, "Our one-on-one date was one of the best days of my life," but said that she couldn't spend the next few weeks sharing Colton with other women. That's kind of what The Bachelor is, so she would definitely be setting herself up for more heartbreak if she stayed, but her feelings for him seemed so real that it was almost like a waste to see her go so soon.

She told Colton that although she has strong feelings for him and cares about him, she wouldn't feel right about their relationship going to the next level in the next few weeks if she had to share him with other women. "I can't accept your proposal after a few months of sharing your time," she said. "You want something [and] I can't promise I will get there… there are a lot of girls that are dying for that opportunity… I like you. I think that's crazy obvious when we’re together. [But] I listen to these girls talk about how much they're falling in love with you."

As hard as it may have been for Colton to watch her leave and for fans who were rooting for Elyse to see her go long before her chance at hometowns, it was probably for the best. If she's this upset after one one-on-one date with Colton, she definitely would have struggled for the rest of the season.

When Elyse told Colton that she didn't think it would be "authentic" of her to stay, it may have been one of the most mature moments this season. Although Elyse and Colton might not have spent enough time together yet to be in love, it was clear that the feelings were there on both sides. At least she had the foresight to know that The Bachelor process wasn't for her, though.

Although Elyse's future in Bachelor Nation isn't guaranteed, there is a good chance this isn't the last fans have seen of her. I don't know if she would fare well on The Bachelorette since this process wasn't really for her on The Bachelor. She could, however, go on to find love on Bachelor in Paradise this summer. It's an even shorter process than The Bachelor, but BIP is often a lot more laid back and some of the contestants go on to have just as successful relationships as the couples who come out of The Bachelor and The Bachelorette. I just hope Elyse is down for it, because fans don't seem ready to say goodbye.