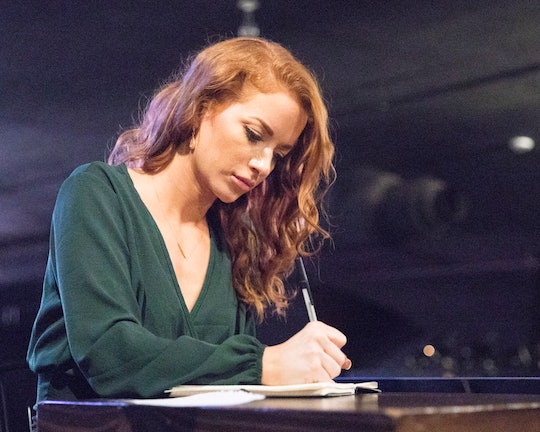 Age will always be a topic on The Bachelor whether fans think a contestant is too old or too young for the Bachelor in question. Colton's season has a healthy range of women and it was 31-year-old contestant Elyse who won the date rose Monday night. She also fully embraced being one of the older women on the show and when Elyse said the older Bachelor contestants are the Cougar Den on The Bachelor, Twitter was here for it. (Mostly).

She referred to herself and the 27 years old and up women as cougars in a joke that seriously defines how a lot of viewers and even contestants see differently aged contestants in the franchise. If you're 22, you're a baby, but if you're over 30, you're an "older woman." Some fans on Twitter were all for her joke about the women older than Colton being the cougars of the season. I mean, you might as well embrace it if your age is going to be talked about anyway, right?

Other fans, however, just felt old after Elyse referred to herself and a handful of other Bachelor contestants as the older women of the season. Technically, they're older than 23-year-old Hannah B. and 22-year-old Heather, but contestants ages 27 and up are in no way what you would call old. I refuse to believe that, and some fans on Twitter feel the same way.

To Elyse's credit, Demi also referred to her as an older woman. Yes, Elyse is older than Colton and the oldest contestant of the season, but age should probably stop being such a point of discussion on the show. Elyse likely felt it was better to address it herself rather than be targeted for it, however, and some fans on Twitter were into it.

Last season on The Bachelor, Bekah M. faced similar scrutiny because she was 22 years old and much younger than the Season 22 Bachelor, Arie. Other contestants accused her of not being old or mature enough to know what she wanted from Arie and eventually, he sent her home. I don't think it will play out quite the same way this season, but Elyse just proves that age will never not be important to other contestants and fans alike.

On the one hand, maybe if Elyse addresses her age, others will be less likely to do so. However it still rubbed some fans who are closer in age to Elyse than the other women the wrong way. Like Colton's virginity, I'm already sick of hearing about Elyse's age, so here's hoping Colton or no one else calls her "brave" for admitting her age. Which, by the way, is far from "old."

I guess when you compare Elyse to the typical Bachelor contestant, she is technically older, but I don't seem to recall Arie being referred to as a "cougar" during his season as a 36-year-old Bachelor. Or whatever the male equivalent of a cougar is, if there even is one. Maybe Elyse is brave for addressing her age first to get ahead of anyone else who might bring it up and use it against her. Not including Demi, of course. But can it stop being a thing?

Unfortunately, I don't think this is the end of the age discussion. I can definitely see Colton giving Elyse some kind of "you're more mature than me" or "I didn't move fast enough for you" conversation if he eventually sends her home. At the very least, the whole cougar den joke showed fans another side of Elyse and potentially helped them root for her more.