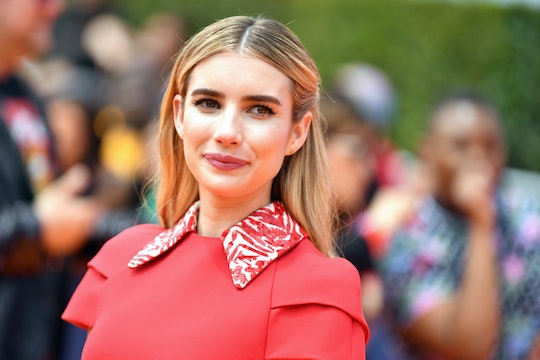 The rumors are true! After initial reports first surfaced in June, Emma Roberts has confirmed she's pregnant and even revealed the sex of her baby in a sweet Instagram post over the weekend.

In a series of photos shared on Sunday evening, the Scream Queens actress can be seen visibly pregnant with her hands placed on her bump, while her boyfriend, actor Garrett Hedlund, sits with his arm around her in the following photos.

This is Roberts and Hedlund's first child together. While the couple —who started dating in March 2019, according to E! News — has been spotted out in public together, the two are very private about each other on social media. Until now, Roberts has never shared a photo of Hedlund on Instagram, which could be due to the fact that she told Cosmopolitan last year that she plans on keeping her relationship to herself. "I never want to talk about relationships I'm in or that are ending or have ended," she told the magazine. "It's hard enough to be with someone by yourself, let alone with an audience. Growing up is hard."

But it seems like some things are worth sharing with an audience. Roberts' famous friends took to the comments of her announcement post and shared some love with the mom-to-be. "Wow congrats!!," Venus Williams commented on the photo. "You will be the greatest mama," actress and new mom Lea Michele added. "I love you Em! Boy moms together!"

Roberts did not reveal how far along she is or when the couple expects to welcome their little one into the world, but hopefully this won't be the last time she shares a pregnancy update. In the meantime, it looks like she's enjoying this special time with her "two favorite guys."