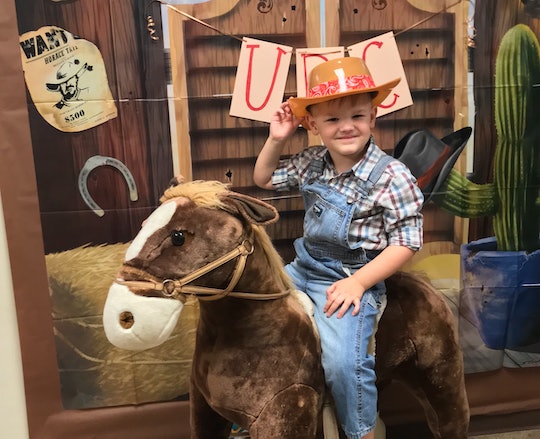 When my son was 3 years old, my husband picked out a pair of overalls for him to try on while we were out shopping for school clothes. I laughed and said, "He's way too old to wear overalls!" thinking my husband was probably just joking. He was not. He looked me dead straight in the eyes and told me that those overalls would be absolutely precious on our child, marched him into the dressing room, tried them on him, and proceeded to buy them. I was mortified.

What the heck would people think if they saw my preschooler wearing overalls? Those were for babies and toddlers. (And apparently millennials, but I'm not fashionable enough to know if that's true or not.) And they are. But now I know, they also look stinkin' cute on little kids. I should know. My son wore the ones my husband bought him that day for almost two entire years.

The best part of that particular pair of overalls was my son's name for them. When getting ready for school pictures the first year that he had them, he famously requested to wear his "cowboy pants" for the photo. While I know cowboys and farmers are not technically the same thing, my son had somehow made a connection from his overalls to roping and riding and it was too genuinely hilarious to ignore. He loved sticking his hands into the deep pockets to pose for pictures, and trying to find toys small enough to stuff into the front flap pocket. It was at that point that I knew, the overalls were here to stay.

We live in Houston where Go Texan day at school is a thing every year. Once a year, all of the little cowboys and cowgirls in preschools and elementary schools don their best Western wear in early spring to celebrate the arrival of the Houston Livestock Show and Rodeo. Paired with a plaid button-down shirt, those overalls would continue to be called "cowboy pants" and make an appearance on this day during each of his two years in preschool.

In that photo, he doesn't look like a cowboy at all to me.

As for that school picture, we paid $100 to get multiple copies of every single shot the overpriced preschool photographer captured that day. One such image remains frozen in time as a magnet on the refrigerator that I swore would never be covered with scribbles of little kid art work and garishly bright plastic letter magnets that don't match the rest of my decor (it totally is, and I love it.). I never imagined that I would be so enamored with the way my little boy looked in those "cowboy pants" that I would be happy to look at a photo of him in them every single day. In that photo, he doesn't look like a cowboy at all to me, nor does he look too much like a baby, as I thought he would in the store that day.

He looks like a little boy. A little boy who loves to romp and play, who calls overalls by a name that may or may not be a little insensitive to the actual cowboys out there in the world, and who has mischievous grins for days. He doesn't look like he should be wearing a diaper or crawling on his hands and knees. Although I'm sure had he had overalls as a baby or toddler this would have been even more freakishly adorable.

Even though I was against the concept of my child over the age of 2 wearing overalls, I've come to know that sometimes the things we think are the most off-the-wall create some of the most cherished memories of parenthood. Those overalls that I thought would look absolutely ridiculous turned out to be something that I have now added to my son's memory box* right alongside his favorite sippy cup and the outfit he wore home from the hospital.

(*OK, it's actually a large gift bag with a rip in the side, but it's still contains treasured possessions, damn it!)

So, if you find yourself staring at a pair of overalls in the store and wondering if your preschooler will look too much like a little baby in them, just bite the bullet and buy the dang things. Nobody's judging. Well, some people might, but don't listen to them. I won't judge you. Because those "cowboy pants" are the cutest thing on the planet and every little kid should own a pair.