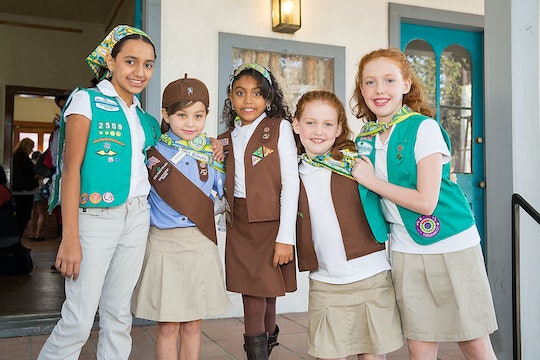 It's been a crazy past few months with the onslaught of sexual assault and harassment charges made against celebrities and it feels like the concept of consent is being talked about more than ever before. And, now, a new Girls Scouts PSA about consent during the holidays is the perfect reminder to parents that kids are often, unintentionally, forced into situations all the time and don't really have a lot of say in the matter.

Around the holidays, there are lots of visits with close family and friends, which means that we send our children into the arms of grandparents, cousins, and extended family all the time. "Go give grandma a hug and thank her for the presents," a parent might say. Or we instruct them to "give auntie a goodbye kiss" before pulling out of the driveway at Thanksgiving.

It seems harmless, and may be perceived as a way to teach manners or social skills, but forcing kids to hug, kiss, or even smile teaches them that they don't have a choice about what happens to their bodies. They don't have to be rude, but they also don't have to hug every grown-up they see.

Of course, some kids may bolt to family and friends when they see them and want to show physical affection. But the ones who don't shouldn't be forced if you want to teach them that their bodies are their own and they have a choice about how close they want to physically get to someone.

The notion of consent may seem very grown-up and like something that doesn’t pertain to children, but the lessons girls learn when they’re young about setting physical boundaries and expecting them to be respected last a lifetime, and can influence how she feels about herself and her body as she gets older.

She added, "Sadly, we know that some adults prey on children, and teaching your daughter about consent early on can help her understand her rights, know when lines are being crossed, and when to go to you for help.”

It's one thing to teach kids about consent and respect their choices. It's another thing to stand up to your sister or mother-in-law who wants to know why your little angel won't give them a hug on demand. Like so many other things before the holidays, it's so important to prepare yourself for the worst and have some canned responses for pesky family members.

You're likely prepared to shut down or avoid other criticisms of your parenting or politics at the Thanksgiving table, so your stance on consent should be no different. The firmer you are about it, the stronger the message to your kid.

There are so many other ways for kids to show their gratitude and happiness for seeing someone than a hug or a kiss. The Girl Scouts recommend high-fives or air kisses, but adding, "thank you" or "I'm so happy to see you" to their vocabulary works, too.

Teaching consent is important on so many levels. Not only does it prepare kids to stand up for their right to choose, it also lets them see (and hear) that saying "no" doesn't have to be a big deal. So not only do they learn that saying "no" to a hug is an option, but that they can stand by their choices (especially when a parent is there to have their back).

Who knows, maybe in 20 years, we'll live in a wonderful world where all kids, whatever their gender, know that they never have to do anything they don't want to do with their bodies. And that they can't just assume someone else "owes" them physical touch or affection. How's that for a holiday wish?