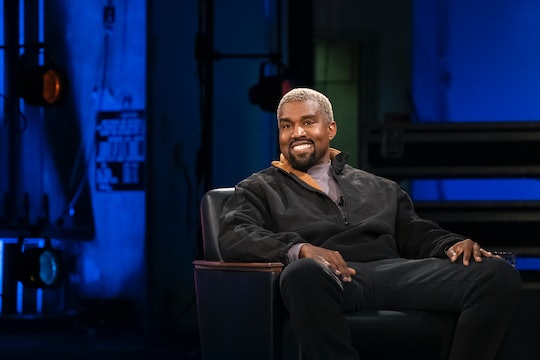 If there’s one guest that has appeared on David Letterman’s Netflix talk show My Next Guest Needs No Introduction who truly exemplifies the title of the show, it’s probably Kanye West. He has become known for saying the most outrageous things almost better than he is known for his music and everything Kanye West said about his kids on My Next Guest Needs No Introduction proves how important parenthood is to him.

West has four children with wife Kim Kardashian — Saint, North, Chicago, and Psalm West. While the singer has continued to build his brand with different clothing lines, art, and music since having kids with Kardashian, he is still something of a family man at heart. He delved into his life before marriage and children and opened up about his own mental health in his interview. And while there is so much about West that remains a mystery to fans and sometimes has them scratching their heads, he made a few important comments about his kids on My Next Guest Needs No Introduction.

Of course the interview wasn't without a few strange lines from West, like his comment about dreaming of having grandkids someday who can literally float because they are "so unprogrammed and so pure." But as much of a confusing figure as he might sometimes seem, West is still a parent and fatherhood seems so important to him.

West donated a lot of time in the interview to explaining his mental health struggles and what being bipolar feels like to the individuals who live with it. He went into great detail about what it feels like and how the mind works both on and off medication. He also went into his opinions and thoughts on medicine and alternative ways of dealing with mental health disorders.

But the fact that he opened up only slightly about fatherhood and his kids shows how important parenting likely is to him. When Letterman asked West about his mom, his clothing line, and the different art projects he’s currently working on, West opened up a lot and went on about these aspects of his life. But when it came to his kids, he just had a few comments. However, maybe the most telling thing is that he chose to keep his comments about his kids in the interview to a minimum. Because in a way, what he did say speaks volumes.

When Letterman asked him what bedtime songs he sings to his kids, West replied with a smile, "I just freestyle." I would expect nothing less from a singer of his caliber, but knowing West and his affinity for art, literature, and deeper meanings, you might take that to mean something even bigger. He might have also meant, in a roundabout way, that he freestyles as a parent. That could be reaching, but with West, it could also be right on the nose.

Later in the interview, Letterman asked West where he thinks his love of literature came from and West said that it is probably in his genetic code and related that to who his own kids are right now. "My kids are who they are already," West said. "You are just born who you are."

Overall, West’s interview on My Next Guest Needs No Introduction showed a side of him that not a lot of people have seen. As he explained in the interview, he can sometimes be seen as an avatar through his music and his interview helped break that down a little bit and show other sides to him that are more important than a persona he might show in his more mainstream music.

He didn't talk about his kids as much as some fans might hope, but what he did say about them was significant enough to show how seriously he takes fatherhood and that it isn't just another role he took on to express himself.