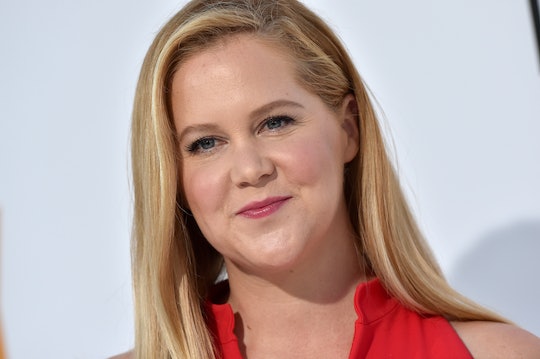 Welcoming a baby is always a big deal. But finding out you're pregnant just months after getting married and at the beginning of a big stand-up tour? That's next level emotional. And as we can see in the first look at Expecting Amy, a docuseries coming to HBO Max, Amy Schumer ended up in tears when she found out she was pregnant with her son, now 1-year-old Gene.

On Wednesday, Schumer shared a clip from her upcoming docuseries Expecting Amy, which was filmed while she was on tour to perform her one-woman stand-up in 42 cities at 60 shows across the county. At the time, Schumer was newly married to her husband, chef Chris Fischer, and from the clip it looks as though fans might be getting a behind-the-scenes glimpse at their February 2018 wedding where Schumer tearfully told Fischer, "I'm so happy for you that you found me."

While the couple were on tour, they also apparently found out they were expecting their first child together, Gene, who is now `1 year old and a regular fixture on the couple's at-home quarantine cooking show for the Food Network, Amy Schumer Learns To Cook. In an emotional scene from the Expecting Amy clip, which will air in three parts on HBO Max on July 9, Schumer emotionally says through happy tears: "I found out two days ago that I'm pregnant. I'm just so excited."

Expecting Amy promises to offer a raw look at the reality of Schumer's difficult pregnancy. As her millions of followers will remember, the comedian suffered so badly from hyperemesis gravidarum, an extreme form of morning sickness that can leave pregnant women severely dehydrated, that she ended up hospitalized. All while touring and working on her Emmy-nominated Netflix special Growing as well as this new docuseries, which was filmed by Homecoming director Alexander Hammer. As Schumer told talk show host Seth Meyers in a March 2019 interview about the experience, "It's been pretty tough, I didn't know that pregnancies could be such a bummer." And yet, she persevered.

Schumer is a force to be reckoned with, pregnant or not. As Sarah Aubrey, head of original content for HBO Max, said in a statement to Variety about Expecting Amy, “Amy Schumer is an inspiration and this project is such an honest look at her experience being on the road while preparing for her special. Her willingness to showcase her immense vulnerability, during the most challenging time in her life, is both empowering and hilarious.”

Expecting Amy will be available for streaming on HBO Max on July 9.