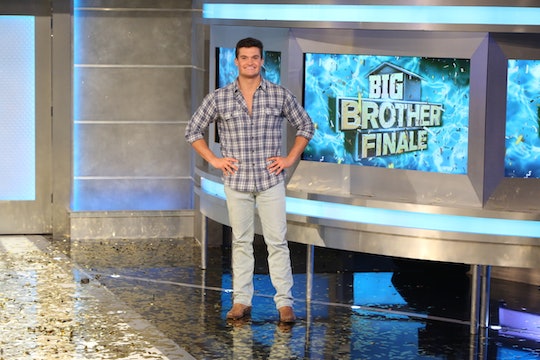 Jackson Michie was crowned the winner of Big Brother 21 on the Sept. 25 season finale of the show. I'd be lying if I said his win wasn't expected (in my opinion) over runner-up Holly from a purely strategic standpoint. But fan reactions to Michie's win on Big Brother prove that he's definitely not a fan favorite — for an understandable reason.

Big Brother is no stranger to controversy involving bullying, and to its credit, CBS didn't cover up Michie's behavior toward women in the house that Tommy told him was "degrading and condescending." Tommy was able to confront Michie about it during the jury's interrogation of the finalists and Michie put up a defense. He called himself "intense" and "passionate" and said he “never, at any point, disrespected a woman’s character or her physical appearance or in any way demoralized her as a person.”

Later, Michie told Entertainment Weekly, "I know that I need to work on [my intensity] and tone it down in a lot of areas, but I don’t see race or gender or anyone when I’m having a conversation." In my opinion, that comment suggests he doesn't understand privilege at all. He was also in a group of cast members that Kemi called out for allegedly displaying racially bias behavior.

Twitter fans and I are sad that because Big Brother is a game of manipulation, behavior like that is often ignored and glossed over in favor of "game play" talk. But, it's awesome that CBS and Big Brother host Julie Chen called Michie out.

There are plenty more opinions on Michie's behavior. But some Big Brother fans admire the way Michie won the game.

Bachelor In Paradise star Demi Burnett just can't wait for the houseguests to get their phones back so she can watch them respond to America's feelings with popcorn.

But my favorite reaction comes from Jackson's former houseguest Kemi who simply tweeted, "Done and done."

I just hope that everyone can learn some valuable lessons from fans' reactions to them. Jackson was visibly shocked in the finale when he walked out to a stage full of confetti, $500,000, and a group of people who had just forced him to examine his behavior and face consequences for it.

Biased comments like the ones Michie made are inexcusable, but if he learns a lesson from his time on the show, at least something positive will come out of it.

No matter how you feel about everyone else on Big Brother 21, I think most fans would agree that a season full of people like Nicole next year would be totally welcome. Big Brother: America's Favorites Redeemed anyone?