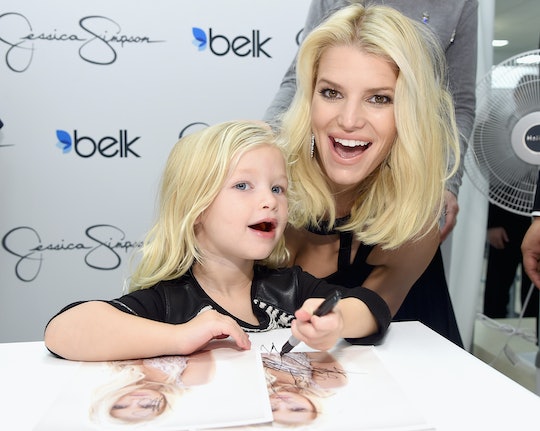 Fans Are Calling Out Jessica Simpson’s Recent Photo Of Her Daughter, & It's Super Sexist

There's no doubt Jessica Simpson loves being a mom. Want proof? Look no further than her Instagram account that's chock full of photos featuring her two kids, 6-year-old Maxi Drew and 3-year-old Ace Knute. Unfortunately for Simpson, however, she and her kids are often picked apart by fans. And on Wednesday, a few people decided to criticize Jessica Simpson's photo of her daughter for a pretty problematic reason. Apparently, some commenters believe Maxi is acting too mature for her age — a critique that is arguably a bit sexist and creepy.

Throughout the past few years, Simpson has faced a lot of backlash from fans for a variety of mind-boggling reasons. From people freaking out because she let Maxi experiment with makeup, to jabs that she dresses too sexy for a parent (I must have missed the parents dress code), it seems like there is a new controversy everyday. Case in point: some people are *furious* about Maxi's 6th birthday photo. Ah, life.

So, what's going on in this controversial pic? As you can see, the post simply shows Maxi posing in front of balloons (I'm mesmerized by these fancy balloons, btw) with one hand on her hip. Simpson simply captioned the photo, according to Instagram: "SIX #MAXIDREW."

Although many commented on how adorable and stylish Maxi is, others took the opportunity to insinuate that she looks too mature for her age.

"Why make ur baby pose like that??" another fan asked. "She's not even a teenager yet!!"

"Stop teaching young girls to pose," someone else chimed in. "She is a child for goodness sakes."

Another commenter added: "She’s six. She looks at least 17. Ridiculous. Let her be a child."

Making matters even worse is that there's a good chance someone referred to Maxi as a "hooker." A fan responded to what appears to be a since deleted comment: "What? A hooker? So rude and disrespectful to say of a 6yr old CHILD! Get a dang life and troll somewhere else! Be kind!"

Of course, there's nothing wrong with how Maxi is posing here. It's obvious that the post shows nothing more than a confident kid who is enjoying her birthday.

First, it's totally inappropriate to imply that a child looks older and can thus be sexualized. Not only that, but to blame that child for the fact that you are sexualizing them is victim-blaming, and it's the reason many victims of rape or sexual assault aren't taken serious. Second, these comments are pretty sexist. I think a lot of people can agree that boys are mostly immune to this type of commentary — it's a rare day that I see someone complaining that a male celebrity kid looks too mature for his age. And if a boy is described as looking older than his age, it usually has positive connotations — "He looks like such a little gentleman."

In this case, however, the connotations are all negative. Although the commenters won't outright say it, they are strongly hinting here that Maxi is being too sexual. For instance, one commenter wrote. "6 years and she poses like that? Well..." Hmm, what is the "well" supposed to mean here? It's pretty obvious this person is suggesting something untoward about Maxi's future. The problem is there's nothing sexual about a child putting their hand on their hip or looking "sassy." The other issue is that these commenters are working hard to make Maxi feel guilty about her appearance — a phenomenon women and girls face all too often.

Luckily, many fans came to Simpson and Maxi's defense.

"If you knew anything about 6 year old girls, you would know this pose is all hers," another fan added. "Get a life."

"She better come thru with confidence!!" one person added.

Although it's doubtful that people will stop critiquing Maxi's looks or actions (that's the life of a celebrity kid, unfortunately), it's nice to see that plenty of fans have her back. One can only hope that these kind fans will inspire other people to question their negative comments.