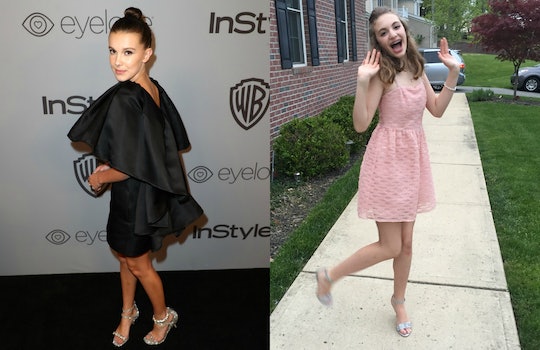 What Is A 13-Year-Old Girl "Supposed" To Look Like?

As soon as photos of the Stranger Things star's red carpet look hit social media, the concern-trolling started, and it shows no signs of stopping.

What makes you think anyone “put” Millie in that dress? Have you ever been 13, almost 14?

“I’m all about fashion & cinematography but this really saddening she better live her ‘teens’ other she’s unfortunately would be another victim for a sick pedophile in Hollywood,” wailed another, cutting straight to the fear-mongering.

Another simply cried, “Too young!”

And yet another chastised, “With all the exploitation and objectification in Hollywood, putting a 13 year old in a risque dress is tone deaf. And tisk, tisk for glorifying it, @wwd.”

Ah, and there’s the crux of the matter right there, my fellow Instagram user. What makes you think anyone “put” Millie in that dress? Have you ever been 13, almost 14?

I have, and I also happen to know one such girl very well — my daughter, who’s a few months ahead of Millie age-wise, but right there with her in the same exhilarating and awful and lovely and impossibly aggravating stage, caught between being a little girl and a young woman.

Last night, as I settled in with my laptop in front of the TV to “work the Globes” with the rest of the Romper team, that exact photo of Millie popped up on my screen. “Oooh look!” I said to Isabella, sitting next to me on the couch, earphones in, taking an online quiz for her freshman year “financial literacy” class. (Buying a car offers ___ flexibility but may ___ money in the long run.)

“Oh I love her,” Isabella gushed. “I love that dress!”

Along with my husband, we watched Stranger Things together this year and last, and we’re big fans of Millie Bobby Brown and the rest of the gang from Hawkins, Indiana. I could see in Isabella’s eyes how glamorous and fun it looked like to be Millie right in this moment. How thrilling, how special, how romantic!

But that moment, like childhood, was cut short by our culture's bizarre desire to drag kids up into our own age bracket of bullshit. Millie got dressed up for a party and was immediately yanked into the ragged debate about how much agency a 13-year-old has, and exactly how she "should" look.

I’ll tell you what a 13-year-old girl looks like.

Sometimes she looks exactly like the meanest mean girl you can remember in high school, casting scorn at you from her very pores as you try to offer her "a little advice” about boys.

Sometimes she looks exactly like that sweet toddler you remember, drifting off to sleep in the back of the car, exhausted from a long day of navigating life (which has suddenly gotten so much more complicated and scary): school, friends, grades, tests (of all kinds), pressures (from all angles).

Sometimes she looks like a goofy kid, sitting around a kitchen table with a gaggle of other goofy kids, eating pizza and listing to “old Taylor Swift.”

And sometimes she looks like an impossibly mature and beautiful young adult. A young woman who quite literally takes your breath away and brings a familiar ache to your throat as you wonder, as you have become accustomed to wondering, “Who is this grown-up looking creature? And where is my baby?” Where is she going, going so fast that you’re afraid to blink too many times in one day for fear of missing one more second of her childhood, even as time speeds up and unspools away from you, she’s going, going… and one day, there she’ll go.

Does Millie look 'attractive' in her Golden Globes outfit? If she does, is that her 'fault?' Is it 'wrong' of her? Unwise? Dangerous?

A 13-year-old, almost 14-year-old girl is “supposed” to look like all of those things, all of those people, because she is all of them, all at once, shifting and changing from moment to moment as she navigates this business of growing up, of making choices, of learning to trust her own shaky foal legs and her tender, unscarred heart. Of making an attempt to embrace the awfully frightening, yet oh-so-alluring world of being an adult woman (and you wish you could save her from all everything that comes along with that, but you know you can’t, and you shouldn’t).

Does Millie look “attractive” in her Golden Globes outfit? If she does, is that her “fault?” Is it “wrong” of her? Unwise? Dangerous? World, I’ll say it one more time: the weight of responsibility remains with the men who would objectify, predate, or assault a minor.

Innocent, knowing, bold, gawky, curious, sexual, graceful, cruel, unkind, angry, complex: a young teenage girl can and should and will be all of those things.

Remember the #MeAt14 hashtag? Such a complex rallying cry, as women shared photos of themselves at 14 in response to the allegations against Roy Moore, the now-defeated Alabama Senate candidate and man accused of, among other things, “having a sexual relationship” with a 14-year-old girl.

Innocent, knowing, bold, gawky, curious, sexual, graceful, cruel, unkind, angry, complex: a young teenage girl can and should and will be all of those things. They know so little, right? But they also know so much.

No whiff of "she had it coming" should ever, ever enter the conversation. Nor should the implication that she *has* it coming.

Of course, I’ve never met Millie Bobby Brown or her parents. And I can only imagine what it must be like for her to to be navigating her life as an actor and a celebrity, right alongside everything else that a 13, almost 14-year-old girl has to deal with.

I look at the photos of Millie, and I see a young girl who is stepping into that new day with grace.

But what I do know is that Sunday night, the Golden Globes were a powerful and truly incredible celebration of women. Of our voices, our power, our inherent right to take up space, to live and work free from harassment, to make our own choices. And that includes our young women, our little girls, our babies who, we pray, are growing up in and helping to create a different universe than the one we faced.

“… I want all the girls watching here, now, to know that a new day is on the horizon!” Oprah said at the end of her glorious speech, talking right to Isabella, to Millie, to every single young girl right now. “And when that new day finally dawns, it will be because of a lot of magnificent women, many of whom are right here in this room tonight, and some pretty phenomenal men, fighting hard to make sure that they become the leaders who take us to the time when nobody ever has to say ‘Me too’ again.”

I look at the photos of Millie, and I see a young girl who is stepping into that new day with grace. She doesn’t need the concern of a bunch of strangers on the internet. She needs respect, and room to grow, as do all our daughters.

In fact, this seems like the perfect time to let Millie speak for herself:

She’s more than capable of it.

More Like This
These 72 Instagram Captions Are Perfect For Your Snow Day Pics
30 Messages To Write In A Valentine's Day Card For Your Child
13 Is "Too Early" For Kids To Be On Social Media, Surgeon General Cautions
The Best Travel Tips For Solo Parenting
What Parents Are Talking About — Delivered Straight To Your Inbox